Dr. Shawqi Allam's planned visit to the African country has met with opposition after he controversially endorsed the death sentence of former Egyptian president Mohamed Morsi.

Egypt's Grand Mufti Dr. Shawqi Allam has been discouraged from visiting South Africa, where a large number of Muslims are bitter about his role in supporting the death sentence given to Egypt's first democratically elected president, Mohammad Morsi.

Allam has faced widespread criticism since June when he endorsed the sentence against the deposed president.

The religious leader will travel to South Africa along with his delegation in the coming days, but the Muslim Judicial Council (MJC) of South Africa has excused itself from entertaining his visit.

The MJC is one of the oldest religious organisations in South Africa and has a large following.

In a letter to the Egyptian Embassy, the MJC said the objective of Mufti Allam's "peace mission" has been diluted after he signed the death warrants of Egyptian citizens including Morsi.

In Egypt, all death sentences have to be approved with a final opinion from the grand mufti, the country's leading religious authority.

"We fear that South African liberation movements in our country would strongly oppose and protest the visit of the Mufti and his delegation, and could potentially escalate into adverse conditions for them during their intended visit," the MJC letter said.

South Africans do not entertain leaders who insist on violating the basic human rights and freedoms of their citizens, nor those who vow on endorsing such injustice!

On Friday, the chairman of the same advocacy group, Zaakir Ahmed Mayet, issued a statement welcoming calls for seeking the investigation, arrest and prosecution of Allam.

Mayet's statement came after the Britain-based Muslim Lawyers Association and Egyptian citizen Mohamed Reda Elhenedawi Elorabi lodged a case seeking the implementation of various pieces of legislation, both domestic and international, which place obligations on the Republic of South Africa to take action against proponents of war crimes and crimes against humanity.

Mayet urged the South African Government to heed the calls for an investigation.

This is not the first time popular unrest has surfaced in South Africa against Egyptian leaders seen as human rights violators.

Last year Egyptian President Abdel Fattah el-Sisi had to cancel a trip to Johannesburg after a group of South African lawyers filed a request for his arrest.

Morsi, a Muslim Brotherhood leader, came to power in 2012 following the end of Hosni Mubarak's 30 year rule over Egypt.

A little over a year later he was removed in a military coup which is believed to have been orchestrated by Sisi.

He was subsequently sentenced to death on multiple charges, including one for escaping from prison.

Thousands of his supporters have been jailed and many killed in a crackdown which began following his ouster.

Morsi's trial drew scrutiny from human rights organisations which saw it as being politically motivated.

"These entire legal proceedings have been a mockery of justice and the death sentences must be thrown out," Amnesty International stated after the sentence was announced. 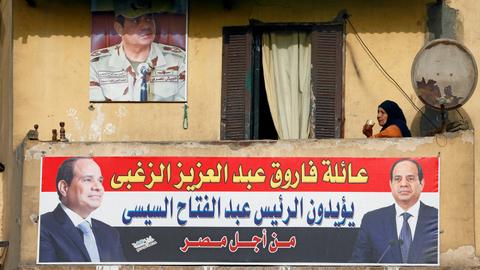