Turkish President Recep Tayyip Erdogan reiterates disatisfaction with the structure of the United Nations Security Council while in Uganda as part of tour of East Africa.

"The world is bigger than five," Turkish President Recep Tayyip Erdogan said in Uganda's capital Kampala, which he visit as part of an ongoing tour of East African.

Erdogan gave a speech in Kampala's Makarere University where he received an honourary doctorate.

The speech kicked off his four-day official tour of East Africa, in which he will also visit Kenya.

In his speech he said there are no Muslim or African countries among the five permanent members of the UNSC.

The UNSC which is tasked with maintaining global peace and security, has 15 members.

These include the five permanent members which have the power to veto any resolution, These are China, France, Britain, the US and Russia.

During his speech, Erdogan spoke about Mehmet Emin, an Ottoman Pasha (high ranking official) who served in Uganda in 19th century.

Emin Pasha, who was a doctor, discovered hundreds of animal and plant species, making a large contribution to science during his 10 years in the region.

"I would like to take this occasion to remember Emin Pasha, who played an important role in Turkish-Ugandan brotherhood and left such a pure legacy. We support Uganda, following in Emin Pasha's footsteps 124 years after his death, and fight for its future and freedom."

Uganda's role in the region

He said medical techniques developed by Uganda had led to a "leap forward" in combating Ebola.

He also added that Turkey has pledged $5 million to help fight the virus.

"Uganda happens to be the leading country in providing resources to the missions, thus contributing tremendously to the re-establishment of peace and prosperity in Somalia.

"As the result of our joint efforts Somalia has become a very different country compared with five or six years ago."

Ugandan singer Bobi Wine says he will run for president 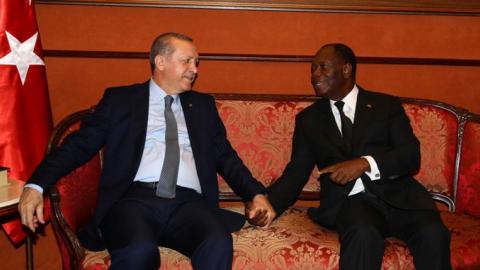