Turkey's president was speaking amid tension over controversial security measures at Jersalem's holy site which have triggered the worst Palestinian-Israeli clashes in years.

Turkish President Recep Tayyip Erdogan said on Tuesday Israel would pay the price for a dispute over security measures it imposed at the entrance to Al Aqsa mosque in Jerusalem.

"Israel, which shows no respect for the Aqsa mosque and Dome of the Rock, will see itself suffer the most damage," Erdogan said.

Anger has spilled across much of the Muslim world since last week when Israeli authorities briefly shut down the Al Aqsa Mosque following a deadly shootout.

''Those who are able to, should visit Al Aqsa. Those who cannot visit Al Aqsa, should send aid to our brothers there,'' Erdogan said at an AK Party meeting in Ankara.

''When Israeli soldiers carelessly pollute the grounds of Al Aqsa with their combat boots by using simple issues as a pretext and then easily spill blood there, the reason they are able to do that is we Muslims have not done enough to stake our claim over Jerusalem," Erdogan added.

The Al Aqsa mosque is Islam's third holiest site after the Haram Shareef mosque in Mecca and the Prophet's mosque in Medina.

Earlier on Tuesday, Israel removed metal detectors from the mosque following a spate of violence in the wake of the killings by Israeli security forces of several Muslims who prayed outside the compound in protest.

A statement released after an Israeli security cabinet meeting said around $28 million would be allocated for a new surveillance system using ''smart checks'' based on advanced technology.

Details of the advanced technologies the cabinet planned to use were not immediately clear.

"Keep praying at the gates"

Grand Mufti of Jerusalem Mohammad Hussein on Tuesday called on Muslims to continue praying outside the compound on which Al Aqsa mosque is located.

In a statement, he said "keep praying at the gates of Al Aqsa Mosque, and in the streets and squares of Jerusalem" until a decision is taken to pray inside the holy site.

"This movement is a movement of the street," said Sheikh Raed Dana of the Waqf, the Islamic endowments organisation which administers the mosque compound.

Many Muslims saw the new security measures outside Al Aqsa Mosque as a change in the status quo and an attempt by Israel to assert further control over the site.

They refused to enter the compound in protest and prayed in the streets outside instead.

Israeli authorities claimed the July 14 attackers smuggled guns into the compound, underscoring the need for the installation of metal detectors.

Jordan is the official custodian of holy Muslim sites in Jerusalem.

The decision also comes after one of US President Donald Trump's top aides, Jason Greenblatt, arrived in Israel for talks on the crisis and with the UN Middle East envoy warning of the risks of escalation.

"The dangers on the ground will escalate if we go through another cycle of Friday prayer without a resolution to this current crisis," Nickolay Mladenov said after briefing the UN Security Council, which met to discuss how to defuse the tensions on Monday.

Mladenov warned that the Jerusalem violence could spread "beyond the Middle East itself."

On Sunday night in Amman, an Israeli embassy security guard shot dead a Jordanian who allegedly attacked him with a screwdriver, according to Israeli officials.

A second Jordanian was also killed, apparently by accident.

Jordan insisted on questioning the security guard, while Israel said he had diplomatic immunity.

The guard arrived back in Israel late on Monday along with other embassy staff, apparently after an agreement was brokered.

During discussions with Netanyahu, Abdullah had demanded that Israel remove the metal detectors.

Friday's weekly Muslim prayers – which typically draw thousands to Al Aqsa – had brought the situation to a boil.

The strife, including the deaths of five Palestinians and three Israelis on Friday and Saturday, have raised international alarm and prompted the UN Security Council to convene a meeting to seek ways of calming the situation.

The mosque compound has served as a rallying cry for Palestinians.

The compound lies in Occupied East Jerusalem, seized by Israel in the Six-Day War of 1967 and later annexed in a move never recognised by the international community. 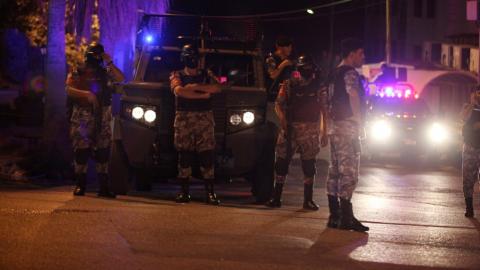 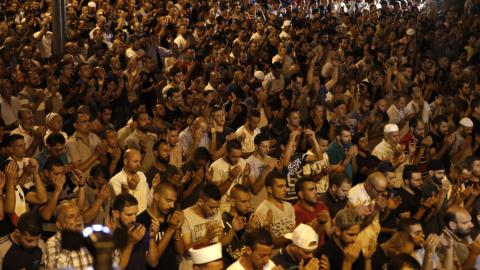 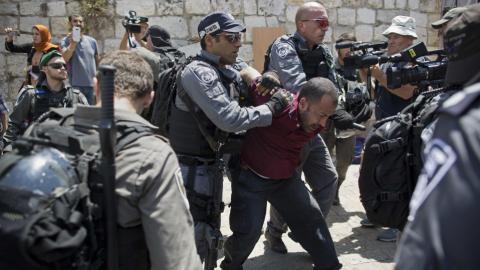