Why is the Aleppo evacuation delayed?

Civilians trapped in besieged eastern Aleppo were due to be bused out on Wednesday morning but Iran, a key backer of the Syrian regime, raised objections. Air strikes and heavy shelling ensued in the city, threatening the fragile truce.

When did the ceasefire in Aleppo come into effect?

It was supposed to begin on Tuesday night. Civilians and opposition fighters were due to leave the war-torn city on Wednesday morning.

A ceasefire agreement brokered by Turkey and Russia meant that Bashar al Assad's forces would hold their fire and allow the people to leave.

But that didn't happen.

Iran raised objections, asking for a simultaneous evacuation of wounded from the villages of Foua and Kefraya. Airstrikes, gunfire, and shelling erupted on Wednesday morning and a monitoring group told Reuters that the truce appeared to have collapsed.

What was the evacuation process?

Civilians would have been first to leave followed by opposition fighters, a Turkish official told Reuters.

They were due to travel in buses toward west Aleppo and onwards to Idlib, 59 kilometres away.

Buses, arranged by Turkey, were on standby and people were scheduled to start moving out of Aleppo from 5:00am local time (0300 GMT) on Wednesday.

Under the agreement, opposition fighters could move to their strongholds in the northwestern province of Idlib and the Syrian countryside.

Who is stopping the civilians and fighters from leaving?

The Syrian regime began dropping bombs and artillery shells over the rebel-held areas of Aleppo soon after the agreed upon ceasefire was meant to begin.

This was after Iran, one of Assad's key backers, put forward a last minute demand of simultaneous evacuation of militiamen and soldiers from villages surrounded by opposition fighters.

But the opposition fighters said that was just an excuse to hold up the evacuation, which was delayed until Thursday.

The United Nations has warned that people from the rebel-held areas could face reprisal attacks from the Shia militias who are fighting for Assad.

What comes next for the opposition fighters?

There are an estimated 1,500 fighters, but how many will leave under the truce is unclear.

Rebel fighters have been squeezed into small areas of the city following the offensive by Assad's forces. They are backed by Washington, Ankara, and several Gulf states. Since the start of the conflict in 2011, Assad has received military and political support from Russia and Iran. 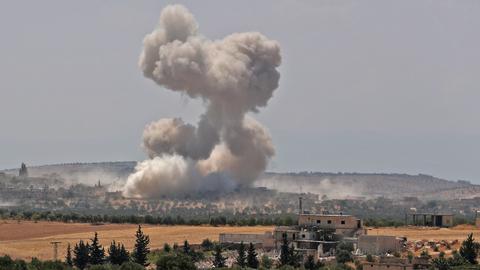