Syrian regime will release 500 prisoners who will cross into rebel territory as part of an evacuation deal.

The Syrian regime will release 500 people under a prisoner swap deal reached with the rebels. Failure to reach an agreement on the exchange had held up the safe passage of thousands of evacuees from four besieged towns.

Mohamad Abu Zeid, a spokesman for the rebel group Ahrar al Sham, said negotiations had concluded on Friday and the prisoners would arrive in a rebel-held area outside Aleppo city "within hours."

The deal coincided with movement of thousands of evacuees from the regime-held, predominantly Shia towns of Foua and Kefraya who had been held up at a transit point outside of Aleppo where a bomber killed dozens of their fellow townspeople last week.

But by Friday afternoon, most of the 45 buses carrying people from the two besieged towns had left the area in rebel-held Rashideen, the Syrian Observatory for Human Rights said.

Dozens of armed rebels were guarding the buses at Rashideen for fear of another attack.

All of the 11 buses evacuating civilians and fighters from Zabadani and two other rebel-held areas around Damascus were also on the move, according to the Observatory.

The buses from Zabadani and surrounding areas headed for rebel-held Idlib province in the northwest.

A total of 3,000 evacuees left their homes in Foua and Kefraya at dawn on Wednesday as part of a deal under which residents and fighters are also being evacuated from the rebel-held areas surrounded by regime forces.

But the evacuees were forced to spend two nights in their buses at the marshalling area after last-minute disagreement over the release of prisoners held by Bashar al Assad's regime.

"After all the buses have left, 750 prisoners will be freed. God willing, this question will be resolved," Abu Obeida, a rebel official overseeing the operation, said.

When the current phase of evacuations is complete, a total of 8,000 people should have left Foua and Kefraya in exchange for 2,500 civilians and rebels from opposition areas. A second phase of the evacuations is to begin in June.

The evacuations began last week but were delayed after Saturday's suicide car bombing killed 150 people, 72 of them children, at the transit point in Rashideen.

The toll in the bombing had previously been given as 126, but the Observatory released a new toll on Friday saying several dozen more people wounded in the attack had since died of their wounds.

Saturday's attack was one of the deadliest since the start of Syria's six-year civil war and was widely denounced for targeting civilians.

"Someone pretending even to distribute aid and attracting the children produced that horrific explosion," UN Syria envoy Staffan de Mistura told reporters in Geneva on Thursday.

According to witnesses, a vehicle distributing food to children exploded near the buses transporting the evacuees. 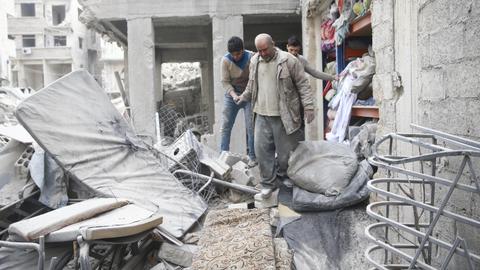