"Uncle Kathy," as he was known, died of pneumonia on Tuesday. He fought the apartheid government over its injustice, inequality and racism. But he also didn't shy away from taking his own African National Congress to task for corruption.

He was imprisoned for 18 of those years on Robben Island, alongside his close friend Nelson Mandela, for defying the apartheid system of white minority rule in South Africa.

For 15 of the 18 years, prisoners like Kathrada had no access to newspapers and their only connection to the outside world was through family visits and notes that prisoners smuggled to each other.

"In our first years we were only writing two letters a year but it then grew in time. When I finished my 25th year in prison, I was writing 40 letters a year. It took a long time before we achieved this. But our spirits never went down. Our spirits remained and we knew that we were going to win one day," Kathrada told Al Jazeera.

"We never imagined Mandela would be president of the country or that I would be sitting in parliament, we never imagined that. But we knew the ANC would win one day – and it has happened in our lifetime."

2. His passion for politics started early

Born into a Muslim family on August 21, 1929, in the small town of Schweizer-Reneke, his love for politics began as early as age 12.

He joined a non-racial youth club run by the Young Communist League.

Kathrada was one of 2,000 "passive resisters" who were arrested in the protests.

In 1962, Kathrada was placed under house arrest. He was the only one of the 156 activists who were acquitted in the treas on trial to be subjected to this treatment.

He went underground to continue his political activities the following year.

In 1964, with other anti-apartheid leaders, he was charged with plotting a revolution in the Rivonia Trial.

He was sentenced to life imprisonment on Robben Island – a high security penal colony, off South Africa's Cape Town – alongside ANC leaders, including Mandela. Kathadra was released in 1989, a year before the future South African president.

After the country's first democratic elections in 1994, which ended decades of white minority rule, Kathrada served as adviser to South Africa's first democratically elected leader. He held the position for five years.

He was one of Mandela's closest friends, the two having forged a bond even before their detention on Robben Island.

When Mandela died in 2013, Kathrada said he felt "alone."

Although Kathrada did not formally serve in government since 1999, he continued to remain active in South African politics and his beloved African National Congress (ANC). He was critical of senior members of the ANC and reports of the growing levels of corruption by senior party leaders.

When South Africa's highest court found that President Jacob Zuma had violated his office by refusing to pay back state funds used to renovate his private home, Kathrada said he should step down.

"Don't you think your continued stay as president will only serve to deepen the crisis of confidence in the government of the country?" he wrote in an open letter to Zuma. 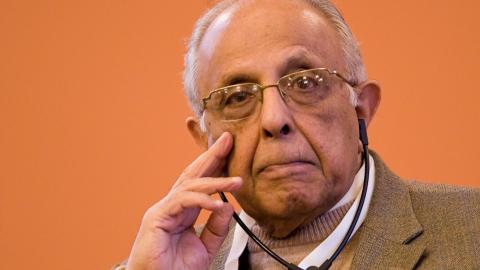