Iranians are casting ballot in run-off elections on Friday for almost a quarter of parliament's members, the latest political wrestling between reformist and conservative politicians seeking to influence the country's future.

Polling stations opened at 8:00am (0330 GMT) on Friday for the ballot that is taking place in 21 provinces, but not the capital, Tehran, where the moderate-wing gained all 30 seats in the first round in February 26.

"The voters will elect 68 lawmakers in constituencies that candidates failed to get 25 percent of votes cast in the first round of the election," said Interior Minister, Abdolreza Rahmani Fazli, state TV reported.

With 68 of 290 seats in parliament at stake, the vote will decide who has the most power when lawmakers are sworn in next month. The current parliament is dominated by the conservative wing.

Run-off elections will determine which wing will control the Iranian parliament for the next term.

Voting ended at 1330 GMT and the results are expected on Sunday.

The moderate-wing allies - who wants Iran to attract more foreign investment and backs moves for greater diplomatic rapprochement - are allied with President Hassan Rouhani's government and they made big gains in the first round, held on February 26, without obtaining a majority.

The conservative-wing allies' claim there is a silent agenda among reformists to give up the principles of the 1979 Islamic revolution.

Nationally, reformists obtained 95 seats and the conservatives 103 in February with nominally independent candidates and minorities sharing others, meaning no faction won a majority.

Mohammad Reza Aref, the leader of the reformist pro-Rouhani List of Hope, has set a target of at least another 40 seats in parliament.

"We need good relations with the world to have a better economy. The government needs support," Hamid Reza Aghayi, a 33-year-old salesman, told AFP in Robat Karim, a city southwest of Tehran, after voting for a reformist candidate.

The first round of voting in February took place six weeks after Tehran's implementation of a nuclear deal with world powers lifted crippling economic sanctions long blamed for hobbling the economy.

"We should protect the country from the arrogant powers and their infiltration," said Zahra Karimdoost, a school teacher in Robat Karim who voted conservative, referring to the United States.

"They follow the leadership more seriously," she said of the conservatives, alluding to supreme leader Ayatollah Ali Khamenei and other clerics at the top of Iran's establishment.

She was referring to revolutionary leader Ayatollah Ruhollah Khomeini and his successor Khamenei, Iran's ultimate authority with powers that far outweigh Rouhani, who was voted into office in a landslide election, in 2013.

The current Supreme leader, Ayatollah Khamenei, also urged strong turnout and has said Friday's voting is no less important than the first round.

"We hope that people in this round can have a parliament in line with the goals of Imam and the leadership by electing principlists," said Gholam-Ali Hadad Adel, head of the conservative coalition.

What was the outcome of the Syria summit in Ankara? 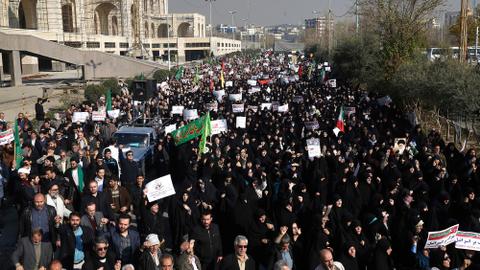