The US-led anti-Daesh coalition said it was unable at the moment to confirm the report.

Iraqi TV said Jumaili was killed with other Daesh commanders in a strike carried out by the Iraqi air force in the region of Al Qaim, near the border with Syria. It gave no detail or date for the raid.

"The air force's planes executed with accuracy a strike on the headquarters of Daesh in Al Qaim ... resulting in the killing of Daesh's second-in-command ... Ayad al Jumaili, alias Abu Yahya, the war minister," said state-run TV, citing a statement from the directorate of military intelligence.

The Iraqi state TV report is the first by official media organisation to announce the death of Jumaili, who was an intelligence officer under Saddam Hussein, the Iraqi president toppled in the 2003 US-led invasion.

Jumaili led Daesh's top security agency in Iraq and Syria, known as Amniya, answering directly to Baghdadi, according to experts.

TRT World spoke to Ammar Karim for the latest.

Iraqi forces, backed by a US-led coalition, have been battling since October to retake the city of Mosul, Daesh's stronghold in Iraq and the city where Baghdadi declared a caliphate nearly three years ago.

Tens of thousands of refugees have been fleeing the city to escape the fighting.

At least 355,000 residents have fled fighting, according to the government, and some 400,000 civilians remain trapped inside the old city.

US and Iraqi officials believe Baghdadi has left operational commanders with diehard followers to fight the battle of Mosul, and is now hiding out in the desert with senior commanders.

A separate battle is in preparation in Syria to drive Daesh from its stronghold there, the city of Raqqa.

Meanwhile, US Central Command said that the air strikes by the US-led coalition against Daesh have likely "unintentionally" killed 229 civilians since the offensive began in 2014.

The tally does not include civilian casualties from March — which could include potentially large numbers of civilians killed in strikes over several days in Mosul's Al Jadida area. Attention has focused on one particularly deadly strike on March 17.

Stephen Townsend, the senior US commander in Iraq, said coalition forces "probably had a role in those casualties." 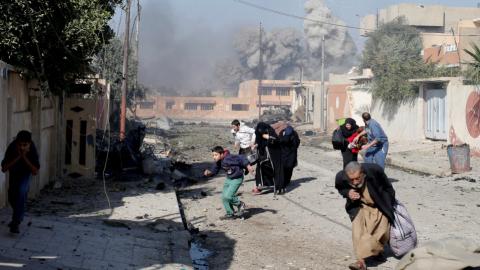 Coalition strikes kill 744 civilians in Iraq and Syria in June