Working with the Iraqi army's Joint Operations Command, the Popular Mobilisation Forces launch the third phase of an ongoing operation to retake areas east of Tal Afar city from Daesh.

The Tak Afar airport is of significant importance as it will cut Daesh's supply lines between Mosul and Tak Afar. The airport will now be used as a launch base of attacks against Daesh in Syria.

The Joint Operations Command was setup by the Iraqi Armed Forces, Kurdish peshmerga fighters and PMF, backed by an international coalition to regain control in Mosul and topple Daesh since it took control of the area in 2014.

The PMF is an umbrella group of pro-government Shia militias established in mid-2014 to specifically fight Daesh.

Tal Afar is a city in Iraq's northern Nineveh province, of which Mosul is the provincial capital.

A large majority of the city is populated by Turkmen or Syrian Turks who settled in the area during the 11th century.

They largely adhere to Turkish customs and culture and also have close ties with the Turkish government.

The involvement of PMF in the Mosul operation has raised concerns that sectarian tensions could be worsened, as these militias have previously been accused by rights groups of abuses against civilians in Sunni-majority areas.

Iraqi military estimates put the number of Daesh gunmen in and around the city at 5,000 to 6,000.

More than 56,000 people have been displaced because of the fighting from villages and towns around the city to government-held areas, according to UN estimates.

The figure does not include the tens of thousands of people rounded up in villages around Mosul and forced to accompany Daesh fighters to cover their retreat towards the city. 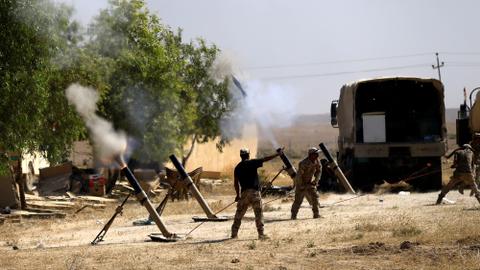