It was not immediately clear whether the incident in Amman, in which two Jordanians were killed and an Israeli seriously injured, was linked to the tensions over the Al Aqsa Mosque compound in Jerusalem.

Israel faced mounting pressure on Sunday over the installation of metal detectors at the entrances of the Al Aqsa Mosque compound in Jerusalem as a shooting at its embassy in Jordan raised further concerns after a weekend of deadly unrest.

It was not immediately clear whether the incident in Amman, in which two Jordanians were killed and an Israeli seriously injured, was linked to the dispute in Jerusalem, where tensions between Palestinians and Israelis have surged in recent days over the installation of metal detectors.

Police said earlier that the two Jordanians worked for a furniture firm and entered the embassy premises before the shooting to do repairs. Police did not identify the wounded Israeli, and few other details were immediately available.

"We have started a large scale investigation into the incident and ordered the prosecutor general to look at all the details," the police said in a statement.

Jordan has seen an outpouring of public anger against Israel in recent days, with officials calling on it to remove the metal detectors at the entrances of the Al Aqsa Mosque compound, referred to as Haram al Sharif or the Noble Sanctuary by Muslims and Temple Mount by the Jews. It is among areas of East Jerusalem that Israel captured in a 1967 war and annexed as its capital, in a move not recognised internationally.

Jordan, which is the ultimate custodian of the holy site, has also been involved in mediation efforts since clashes erupted on July 14 following a shootout within the compound in which three Palestinians and two Israeli policemen were killed. Israel installed metal detectors following the incident.

The metal detectors remained in place on Sunday and clashes between Muslim worshippers and Israeli security forces continued after prayers at the entrance to Jerusalem's Old City on Sunday night.

Palestinians view the tougher security measures as Israel asserting further control over the site. They have refused to enter the compound in protest and have prayed in the streets outside.

"Since the start of the events, I have held a series of assessments with security elements including those in the field," Israeli Prime Minister Benjamin Netanyahu said at the start of a cabinet meeting on Sunday.

"We are receiving from them an up-to-date picture of the situation, as well as recommendations for action, and we will decide accordingly."

Palestinian president Mahmud Abbas, who has announced he was freezing contacts with Israel over the dispute, said Sunday this included the security coordination that has been credited with preventing wider unrest in recent years.

"They must know that they will be the main losers because we play an important role in assuring our security and theirs," Abbas said.

The UN Security Council will hold closed-door talks Monday about the spiralling violence.

Friday's prayers, which typically draw thousands to Al Aqsa, brought the situation to a boil.

In anticipation of protests, Israel barred men under 50 from entering the Old City for prayers.

Clashes broke out between Israeli security forces and Palestinians around the Old City, in other parts of annexed east Jerusalem and in the occupied West Bank, leaving three Palestinians dead.

The Palestinian Red Crescent ambulance service said hundreds of Palestinians have been injured since the protests first erupted.

Israel's tough measures around the Al Aqsa Mosque compound have drawn criticism in the Muslim world and on Sunday Turkish President Recep Tayyip Erdogan called on Tel Aviv to act in line with international law and fundamental values as tension escalates.

"Attacks on the rights, freedom and beliefs are not to be tolerated," Erdogan stressed during a press conference at Ataturk Airport, Istanbul, before departing for Saudi Arabia.

"As OIC Term President, I invite the Israeli administration to abide by the settled practices. I would like to once again highlight that they should avoid any steps that would escalate issues."

Muslims around the world termed Tel Aviv's new security measures at Al Aqsa mosque as an attempt to change the status quo - a delicate balance of prayer and visiting rights.

Israel, for its part, refused to remove the detectors, claiming the security measures were similar to procedures adopted at other holy sites around the world. 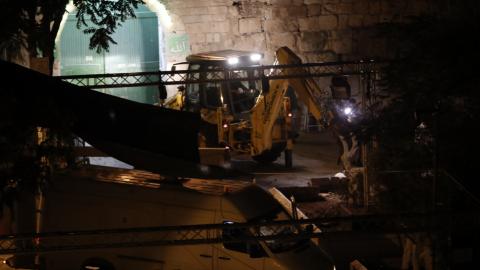