Gaza health officials say the missile hit an empty building in Gaza City and the casualties were passers-by after Israeli troops and Hamas fighters exchanged missiles and rockets in a worst flare-up of fighting since 2014.

Witnesses said the air strike hit an empty building in Gaza City and the casualties were passers-by.

An Israeli military spokesperson had no immediate comment on the report.

The Israeli military carried out dozens of air strikes in Gaza and Palestinian resistance groups fired dozens of rockets into Israel throughout Saturday in a flare-up of fighting.

Hamas, which governs the enclave, responded by firing a dozen rockets toward Israel.

Israeli medical officials said three Israelis have been wounded by shrapnel from a rocket that landed on a house in southern Israel.

TRT World's Mohammad Mansour is at one of the sites in Gaza destroyed by an air strike.

However, Israel and Gaza's armed groups agreed a ceasefire to end a sharp surge in the violence, a Palestinian official told Reuters.

"Egyptian and international efforts succeeded in ending the current round of escalation," the Palestinian official, who is familiar with the talks, told Reuters on condition of anonymity.

Israel has decided "to take strong action against Gaza aggression", an Israeli government official said on Saturday after the worst flare-up of fighting since a 2014 Israeli incursion in Gaza.

The official spoke on condition of anonymity.

The exchange comes a day after clashes that saw a Palestinian teenager shot dead and many wounded including an Israeli soldier.

The exchange threatened to spark a further conflagration after weeks of tensions along the volatile fence.

The health ministry in the Hamas-run Strip said that 220 Palestinians were wounded by the Israeli fire in Friday's protests on the Gaza fence in addition to 15-year-old Othman Rami Halles who was shot dead.

"The protection and the defence of our people is a national duty and a strategic choice," Barhoum said.

Palestinians in Gaza have for months been demonstrating against Israel's decade-long blockade of the territory and in support of their right to return to lands they fled or were driven from during the war surrounding the creation of Israel in 1948.

Since the protests and clashes broke out along the Gaza-Israel fence on March 30, at least 140 Palestinians have been killed by Israeli troops.

No Israelis have been killed.

Israel and Hamas have fought three wars since 2008. 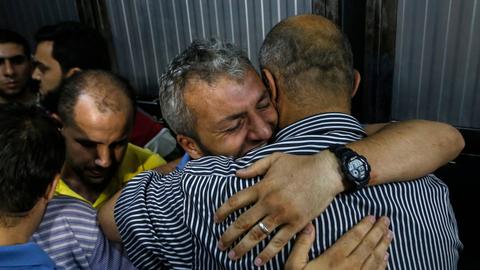