Thousands of Syrians are fleeing the war zone, with some seeking shelter in the Kurdish-held north, and the rest going to rebel-held areas.

The offensive has triggered a mass exodus of civilians from the east of the city who are fleeing to safer ground as the battle between regime forces and rebels intensifies, according to British-based Syrian Observatory for Human Rights (SOHR).

As it stands, the city is split in two, with the regime-controlled west and the rebel-controlled east, where almost 250,000 people live under siege. The offensive, which was launched by Assad's forces in September and backed by Russia and Iran, aims at retaking Aleppo and would be a major victory for the regime.

At least 6,000 people have already fled to the Kurdish-held northern district of Sheikh Maksoud, with the rest fleeing to rebel-held areas, SOHR reports.

"It is the first exodus of this kind from east Aleppo since 2012," SOHR's head, Rami Abdurrahman, said.

"We left Hanano [district] because of the bombardment from the Syrian army during their advance. And the chlorine gas," said Muhammad, who declined to use his full name out of fear for his safety.

The Syrian Arab Red Crescent (SARC) has registered 4,000 people in the regime-controlled Jibreen district of western Aleppo after they fled from the city's rebel-controlled eastern areas, the UN humanitarian spokesman Jens Laerke said.

Laerke said SARC was providing many of them with food and other assistance.

The latest push from Assad's army comes after days of air strikes, shelling, and barrel bombs. Civilians, besieged in east Aleppo for months, have faced serious food and fuel shortages.

The civil defence in Syria's rebel-held eastern Aleppo has exhausted its fuel reserve, and all fuel remaining in its vehicles and equipment will run out within two days, an official in the organisation said.

On Saturday, dozens of families fled the Sakhur and Haidariya districts as at least 18 civilians were killed during regime raids in several areas, SOHR reported.

At least 225 civilians, including 27 children, have been killed since the regime's latest assault on east Aleppo began on November 15.

"Many people are being displaced from the eastern to the western neighbourhoods of besieged Aleppo. There were about 300 families which moved, but there are families who are exhausted and the army is advancing in a very big way," Ibrahim Abu Laith, an official at the civil defence rescue organisation in east Aleppo, said.

People are also being displaced internally within east Aleppo. Hundreds are moving south inside the besieged area to avoid being trapped in the smaller northern part.

Syria's war has killed more than 400,000 people and displaced more than half the population. 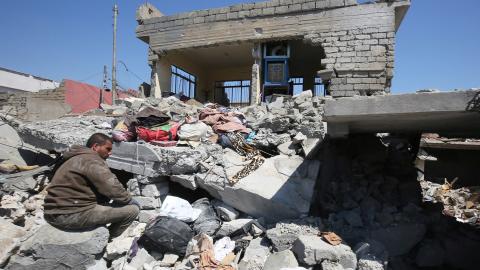