Number of refugees and migrants crossing the Mediterranean Sea has decreased by three times, yet the number of fatalities has increased as compared to last year, says UNHCR.

The number of people who have drowned in the Mediterranean Sea so far this year has almost matched last year's death toll, aid agencies said on Tuesday.

Figures from the past two years reveal an alarming rise in the rate of deaths on the Mediterranean.

Compared to this year so far, three times as many people - more than one million – took to the seas in 2015, the United Nations High Commissioner for Refugees (UNHCR) said.

Millions of people have travelled through the Mediterranean over the past few years to escape conflict in different parts of the world and to find better prospects of life in Europe.

At least 3,740 refugees and migrants have died crossing the Mediterranean in 2016 this is the worst we have seen https://t.co/XTSulPfmU0 pic.twitter.com/HiWR6FZUBR

"This is by far the worse we ever have seen in the Mediterranean," William Spindler, spokesman of the UNHCR, told a news briefing. "You could say that the death rate has increased three-fold."

The UN agency said smugglers are now sending thousands of people on flimsy inflatable rafts from Libya to Italy in mass embarkations.

The reason could be the smugglers intention to lower the risks of being caught, but in doing so they also complicate the work of rescue teams, it added.

Since the European Union-Turkey deal in March to close down pathways to Greece, the Libya to Italy route across the central Mediterranean has become the main route.

About 2,200 migrants were plucked to safety in the central Mediterranean in 21 rescue missions on Monday and 16 bodies were recovered, the Italian Coast Guard said.

One of every 47 refugees or migrants attempting the voyage between Libya and Italy is meeting death, the UNHCR's Spindler said.

"Smuggling has become a big business, it's being done almost on an industrial scale. So now they send several boats at the same time and that puts rescue services in difficulty because they need to rescue several thousand people on several hundred boats," he said.

"But when you have so many people at sea on boats that are barely seaworthy, then the dangers obviously increase." 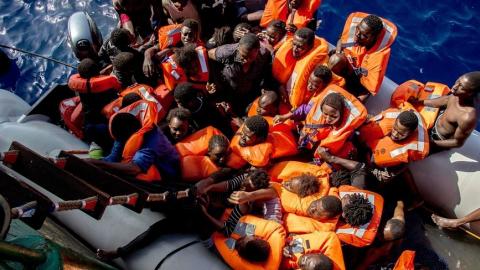