The confrontation near a military post occurred when an Israeli settler in a car attempted to drive through a crowd of Palestinian protesters.

A Palestinian was killed by an Israeli settler on Thursday during clashes near the city of Nablus in the occupied West Bank, the Palestinian health ministry and security sources said.

The clashes near a military post erupted when an Israeli settler in a car attempted to drive through a crowd of Palestinian protesters, with the settler and Israeli soldiers opening fire, Palestinian security sources said.

The Palestinian who was killed had been shot in the head and was identified by the health ministry as Muataz Bani Shemsay, 23, from a village near Nablus.

She said that soldiers had "responded with riot-dispersal means. One of the Israeli citizens whose car was damaged from the rocks fired into the air."

"From what we understand it is not from [soldiers'] fire, but the incident is still under review," she said.

Hundreds of Palestinians had gathered at an Israeli military checkpoint at Huwara, south of Nablus and the regular site of clashes between Israeli soldiers and Palestinian stone-throwers.

The protest was held in support of hundreds of Palestinians in Israeli jails on hunger strike since April 17. 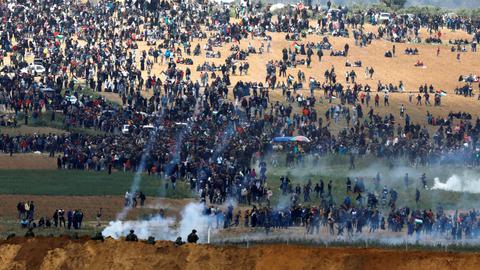