Douma in eastern Ghouta now has a population of around 200,000 people, with people displaced from other devastated districts facing a renewed blitz by the regime on the enclave’s last rebel-held area.

Pressure was mounting on Wednesday for rebels to accept a negotiated withdrawal from their final holdout in Syria's eastern Ghouta, as hundreds boarded buses to leave another part of the battered enclave.

Thousands of opposition fighters and civilians have agreed to quit the former rebel bastion of Ghouta, target of a five-week-long assault by the regime.

The Syrian regime has recaptured more than 90 percent of Ghouta, and is draining the last opposition pockets with negotiated pull-outs mediated by Russia.

Moscow has secured two such deals already and has been pressing Jaish al Islam, the rebel faction in control of the third and final pocket of the enclave near Damascus, to leave too.

The group holds Ghouta's largest town of Douma, whose population has swelled to an estimated 200,000 with people displaced from other devastated districts.

Jaish al Islam had hoped to reach a settlement that would avoid their evacuation, but they were now facing the spectre of a renewed blitz on Douma.

Regime forces were clustering around the town for a second day on Wednesday, Syria's Al Watan daily reported.

The regime had "amassed further around Douma to increase pressure on Jaish al Islam to accept a reconciliation deal, like those in neighbouring towns and cities in eastern Ghouta," it said.

The armed faction was also under growing pressure from Douma's residents, several hundred of whom descended into the town's main square on Wednesday.

They marched down streets lined by crumbling buildings, demanding to know how negotiations with Russia were going and calling for the release of people held by Jaish al Islam, residents told AFP in Beirut.

Jaish al Islam had been in talks with Russia to reach a settlement whereby they could stay in Douma as regime-provided water and electricity returned to the town.

Russian military police, but not Syrian regime forces, would have a presence in the town.

But negotiations faltered over the group's demands that Syria's regime grant them a general amnesty and allow Douma's residents to move freely across the country, a source with knowledge of the talks told AFP.

"At the end of their meeting Monday, the Russians gave Jaish al Islam two choices: surrender or face an attack," another source close to the talks said.

Determined to clear rebels out of their six-year bastion of Ghouta, regime leader Bashar al Assad launched a military assault on the suburb on February 18.

He pursued a divide-and-conquer strategy, seizing most of the enclave then breaking up what was left of it into three pockets each controlled by a different group.

Moscow stepped in to negotiate a deal for each area.

A first deal saw more than 4,500 hard-line rebels and civilians bussed out of the town of Harasta to opposition-held Idlib province in northern Syria.

A second agreement between Russia and the Faylaq al Rahman faction has already seen nearly 20,000 people quit the towns of Arbin and Zamalka and the Jobar district since last week.

Their spokesman Wael Alwan has said as many as 30,000 could be evacuated from those towns in total.

On Wednesday alone, more than 6,000 people reached a transit point in northwestern Syria after having evacuated Ghouta the previous evening.

Dozens of buses pulled in to the Qalaat al Madiq staging ground with their windows broken, an AFP correspondent there said.

Evacuees said people had thrown rocks at the convoy as it drove through regime-held parts of Syria.

Once they reached Qalaat al Madiq, wounded rebels hobbled off the buses to get medical treatment and aid groups could be seen handing out toys, milk, and juice to children.

Some evacuees had family members and friends waiting to take them to the neighbouring province of Idlib, but others were bussed to displacement camps.

According to state media, hundreds more people were boarding buses in the Faylaq-held pocket of Ghouta on Wednesday for new evacuations.

They said more than 128,000 people had fled Ghouta in recent weeks, many of them through routes into regime-held territory that were opened by advancing regime forces. 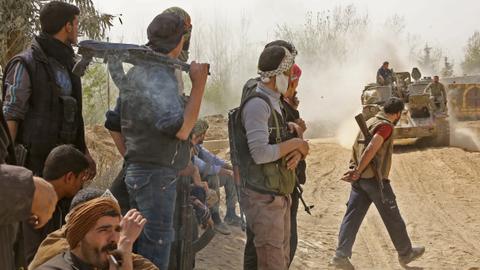