Saudi Arabia, the United Arab Emirates (UAE) and several other Sunni-majority countries have severed relations with Qatar since June 5, accusing the Gulf state of supporting terrorism based on its ties to the Muslim Brotherhood, Hamas and the Taliban.

Saudi Arabia, the UAE, Bahrain, and Egypt refrained from slapping further sanctions on Qatar but voiced disappointment at its "negative" response to their demands and said their boycott of the tiny Gulf nation would continue.

The foreign ministers met in Cairo after a deadline they gave Qatar to meet 13 demands expired. They had been expected to consider further sanctions at the gathering but announced no new measures.

"The response the four states got was overall negative and lacked any content," Egypt's Foreign Minister Sameh Shoukry said, reading out a joint statement after the meeting.

"The political and economic boycott will continue until Qatar changes its policies for the better," Saudi Foreign Minister Adel al Jubeir said.

Qatar's response to the demands has not been made public.

"What we've done in the last few weeks is develop different alternatives to ensure the supply chain for the country not to be cut off."

Qatar announced on Tuesday that it planned to raise LNG production capacity by 30 percent in the next five years.

Company and industry sources told Reuters that the West's three biggest energy firms are lobbying Qatar to take part in a huge expansion of its gas output, handing Doha an unintended but timely boost in its dispute with Arab neighbours.

"We are still waiting for the response from our brothers in Kuwait regarding the response that they received from Qatar and once we examine it among ourselves we will take the decision of course," Sheikh Abdullah said at a news conference with his German counterpart in Abu Dhabi.

Officials from the UAE and Saudi Arabia have suggested that further sanctions, including the possibility of kicking out Qatar from the six-member Gulf Cooperation Council, could be imposed if Doha failed to heed the demands.

Qatar to boost gas production by 30%

Energy-rich Qatar said it plans to increase natural gas production by 30 percent over the next several years, as it faces pressure from its neighbours in a diplomatic crisis.

The timing of the announcement is likely to be seen as much political as economical.

Saad Sherida al Kaabi, the head of Qatar Petroleum, told a press conference that the emirate intends to raise production to 100 million tonnes of natural gas a year by 2024.

"This new project will strengthen Qatar's leading position, we will remain the leader of LNG for a very long time," Kaabi told reporters. 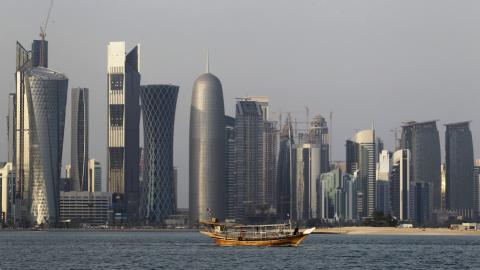