Air strikes by Syrian regime on a rebel-held region near Damascus killed at least 22 civilians on Monday, the Syrian Observatory for Human Rights said.

The highest toll was in Douma, the largest town in the Eastern Ghouta region, where raids killed 16 civilians including at least one child and wounded 22, it said.

A witness at the town hospital said he saw many wounded people, their faces bloodied. All the facility's beds were occupied by men, women and children.

The Eastern Ghouta region is adjacent to the capital's eastern neighbourhood of Jobar, which is divided between regime and rebel control.

Last month, the armed opposition launched a surprise assault against regime forces from Jobar, but was repelled after a week of fighting.

Eastern Ghouta has been under a devastating regime siege since 2012, and is targeted regularly by air strikes and artillery.

It is the last remaining opposition stronghold near Damascus, where a string of local "reconciliation deals" have seen villages and towns brought back under the control of regime leader Bashar Al Assad.

The regime is fighting to push rebels out of five neighbourhoods in Damascus.

The rebels control almost all of Qabun and Tishreen in the northeast, as well as half of Jobar in the east.

They are also present in Barzeh in the north and Tadamun in the south, but the neighbourhoods are covered by a truce with the regime. 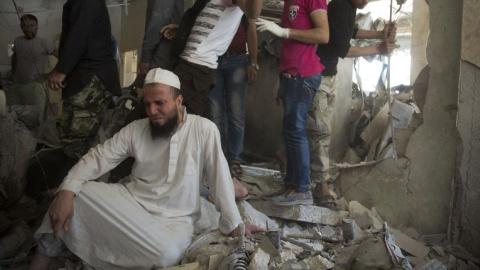