Ankara opposes Russian demand to include PYD in the Syrian Opposition

During a meeting in Manila, Turkish Foreign Minister Cavusoglu tells his Russian counterpart Lavrov that Moscow's demand to include PYD members to the National Coalition for Syrian Revolutionary and Opposition Forces is unacceptable to Ankara.

Turkish Foreign Minister Mevlut Cavusoglu held a meeting on Monday with his Russian counterpart Sergey Lavrov on the sidelines of the Association of Southeast Asian Nations summit in Manila, the capital of the Philippines.

The two ministers discussed the ongoing Syrian conflict, the economic ties between the two countries and visa-free travel for Turkish citizens to Russia.

Russia wants the umbrella organisation of Syrian opposition groups, National Coalition for Syrian Revolutionary and Opposition Forces, to increase the number of its members. Russia and Turkey are working on including names that belong to different minority groups from Syria.

Moscow's demand to add names from the PYD has created problems. That topped the agenda in Manila. Cavusoglu again insisted that it's the red line for Ankara and such a move would be unacceptable.

Ankara considers the PYD to be the Syrian affiliate of the PKK, which is designated as a terrorist organisation by Turkey, the US and the EU.

The PKK has been waging an armed campaign against Turkey that has claimed more than 40,000 lives during the past three decades.

PYD now controls large swathes of northern Syria, especially along the country's border with Turkey. The US has been providing military and financial support to the group.

Moscow says it wants to balance out US influence on the group. But any support to the PYD is unacceptable to Turkey under any pretext as it could lead to the strengthening of PYD positions in Syria.

Lavrov and Cavusoglu discussed how to establish four de-escalation zones in Syria, especially in Idlib, in light of an agreement reached by Turkey, Russia and Iran during a round of peace talks held in the Kazakh capital, Astana, earlier in May.

Idlib is the most crucial zone now since the former Al Qaeda-affiliated militant group Hayat Tahrir al Sham took control of the city.

During the subsequent round of talks held at the beginning of July in Astana, an agreement could not be reached on the details of the de-escalation zone.

Turkish, Russian and Iranian officials will meet in Tehran on August 8 to discuss the details of the de-escalation zones.

Another topic discussed during the meeting between the two foreign ministers was improvement of economic ties between the two countries and visa-free travel to Russia for Turkish citizens.

After a Russian fighter jet was shot down in 2015 by a Turkish jet in Turkey Syria border region, Russia limited the trade with Turkey. It affected Turkish exports of vegetables and fruits. Last year, in August Turkish President Recep Tayyip Erdogan visited St Petersburg and the two countries began to normalise their trade relations again.

Turkish and Russian citizens used to enjoy visa-free travel before the crisis. But Russia placed some restrictions on Turkish citizens that are now being lifted one by one.

Cavusoglu told reporters today export of tomatoes is the last important issue left between the two countries. "We discussed how to improve our economic ties. It was a productive meeting." 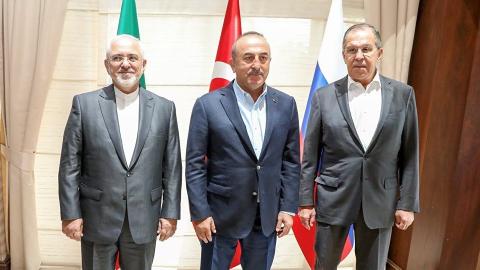