South Africa's ruling African National Congress pledged to back President Jacob Zuma in the no-confidence motion, aiming to thwart opposition efforts to force him out.

Thousands of South Africa's opposition supporters held a rally on Tuesday in Cape Town where parliament is located, calling for removal of President Jacob Zuma.

South Africa's parliament began debating the no-confidence motion against Zuma, who is accused of corruption and mismanaging the economy.

Today is a historic day. We work towards the removal of Jacob Zuma. My vote is no secret. Let's get SA on the right track towards prosperity pic.twitter.com/Eai9ckfTmP

"Go, Zuma go!" the leader of the main opposition Democratic Alliance (DA) party, Mmusi Maimane, called out to the crowd. "We will vote this afternoon to make sure he leaves," he said.

Julius Malema, leader of the leftist Economic Freedom Fighters (EFF), said, "We are here to reclaim our country."

Melanie Rice reports from Cape Town in front of the parliament.

South African parliament began debate in the no-confidence motion against Zuma, with both treasury and opposition benches making speeches in support of their respective arguments.

The country's defence minister, Nosiviwe Mapisa-Nqakula, who is a member of the ruling African National Congress (ANC) party, said that there had been several unsuccessful attempts to remove Zuma, and that the only difference was that this latest no-confidence vote would be a secret vote.

She also accused the opposition of attempting to remove the ANC government.

She pointed out that the ANC had received more votes than all the other parties combined at the previous national election in 2014
"My conscience is that we need to respect the voters that brought us here," she said. "Let's go to a general election. We should not use other tactics to get rid of a governing party. That would be akin to a coup."

Malema, addressing parliament, said, "We are not here today to remove a democratically elected government of the ANC, which was voted for by our people in 2014. Whether we like it or not, we must at all times respect the wish of the people. And that is why we are here to make it very clear that ours today is not against the ANC, but against the father of Duduzane. We are here to remove Duduzane because Duduzane's father is the most corrupt individual in this country."

Duduzane Zuma is the son of President Zuma and has been linked to many dubious deals. Duduzane came into the spotlight after joining companies owned by the Gupta family, which has been accused of having undue influence on Zuma and his government.

The United Democratic Movement's leader Bantu Holomisa urged members of parliament to "vote against Mr Zuma, the chief architect of the state of capture."

The Democratic Alliance's national spokesperson, Phumzile van Damme told the parliament, "No president who has stolen the people's money, violated our constitution and broken his oath should be protected by this house and its members."

Urging the ANC to fire Zuma ,she said it was not a motion to remove the ANC or the ANC-led government, but a move to remove Zuma. "It is clear that Jacob Zuma has sold our country out including his own party."

Lawmakers in the ANC pledged to back Zuma in the no-confidence motion, aiming to thwart opposition efforts to force him out.

The ANC has 249 seats in the 400-seat parliament and the opposition controls 151, so it would take 50 ANC lawmakers backing the opposition to vote Zuma and his cabinet out.

ANC's Secretary General Gwede Mantashe said the no-confidence motion was an attack against the party.

"It's about removing the ANC from power in a non-democratic way, therefore MPs have a responsibility to defend the ANC," Mantashe said.

Zuma has already survived seven no-confidence votes during his eight years in power thanks to loyal voting by ANC lawmakers, but those votes were not secret.

"We still expect the vote to fail, but attach a 30 percent chance of success," said Mantashe.

If the motion is successful, Zuma – whose term is due to run until 2019 – would be removed as president but would remain as ANC leader until December, when he is due to step down and a new leader elected in his place. 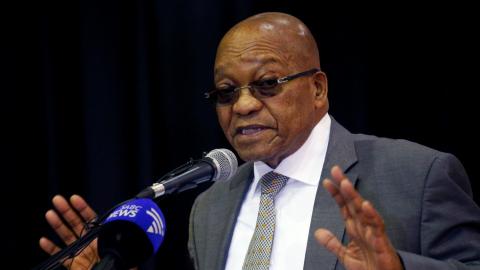