At least seven people, including four children, were killed on Tuesday after a suicide bomber struck a school in Syria's northwestern Idlib province, activists said.

The victims also included three teachers after a suicide attacker blew himself up inside the school run by Jabhat Fateh al Sham – the former Al Qaeda affiliate – Jabhat al Nusra.

The blast caused the entire building to collapse. No group claimed the responsibility for the attack.

Idlib province which is mostly controlled by rebels, have been witnessing a series of suicide attacks by Daesh that mainly targets rebels' headquarters.

Despite talks in Kazakhstan's capital Astana over a possible deal to create de-escalation zones in Syria, regime forces have launched an offensive against rebel groups in a Damascus suburb of Jobar, activists said on Wednesday.

Activists said that the regime's attack is backed by artillery shelling and aerial bombardment leaving hundreds of families trapped in the area.

The US-backed Syrian Democratic Forces (SDF) have made a new advance against Daesh by recapturing al Sinaa neighbourhood in the east of the Raqqa, Daesh's de facto capital in Syria.

Al Sinaa was previously under the control of the SDF, but Daesh had taken it back at the end of June.

The advance came after the US-led coalition opened two small openings in the walls of the old city of Raqqa.

The SDF is an alliance that was formed in 2015 and dominated by the YPG.

YPG is the Syrian extension of PKK, which is listed as a terror organisation by Turkey, the US, the EU, and NATO.

The strategic cruise missiles used in the strike from a distance of around 1,000 km were the newest Kh-101 type, the ministry said.

Such missiles can hit targets at a distance of up to 4,500 km and can carry nuclear warheads, it added.

The war in Syria continues to be the main reason for thousands of asylum applications in Europe, the EU said on Wednesday.

A new report released by the European Asylum Support Office (EASO) revealed that, despite a more than a seven percent decline in the number of asylum applications in 2016 compared to the previous year, Syrian nationals still accounted for over a quarter of the 1.3 million applicants.

"The highest numbers of asylum applicants recorded were citizens of Syria, Afghanistan, Iraq, Pakistan and Nigeria," the report said. 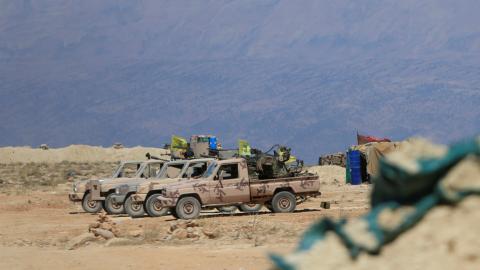