The death toll from a suicide car bomb earlier on Monday near a hotel in the Somali capital has climbed to at least 13, police said.

A spokesman for the Al Qaeda-linked Somali militant group Al Shabab claimed responsibility for the attack.

The blast occurred after a suicide bomber rammed an explosive-laden car into a checkpoint on the busy Maka al Mukaram street but missed the apparent target - Wehliye Hotel.

The explosion damaged a house on the same street, police said.

"We have carried 13 dead people and 14 others are injured. The death toll may rise further," Abdikadir Abdirahman, director of the aid-funded Aamin Ambulance services said.

Earlier on Monday, police shot at a minibus, also in Mogadishu, when the driver refused to stop as it approached a checkpoint.

In recent years, Al Shabab has lost most of its territory to African Union peacekeepers supporting the UN-backed Somali government.

But the militants frequently launch deadly gun, grenade and bomb attacks in Mogadishu and other regions controlled by the federal government.

Many attacks are aimed at military bases but some also target civilians.

A hotel attack in late January killed at least 26 people. 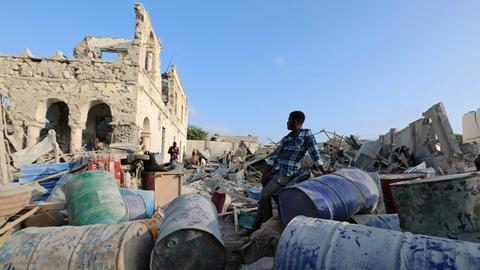