The Russian military claims more than 60 soldiers have been killed in the airstrike which can falter the fragile ceasefire but US said the target was unintentional.

The US military said on Saturday that an airstrike carried out by coalition's jets may have hit Syrian soldiers but the target was not the regime forces.

"The strike was in an area the coalition had attacked in the past, and coalition members had informed their Russian counterparts before it began," the US military's Central Command said in a statement.

Coalition forces have halted further airstrikes in the area south of Deir-al-Zor.

Earlier, the Russian military said that air strikes allegedly carried out by the US-led coalition operating in Syria killed over 60 Assad regime soldiers.

"Warplanes from the international anti-jihadist coalition carried out four air strikes today against Syrian forces surrounded by the Islamic State [DAESH] group in the Deir Ezzor air base," a Russian Army statement said.

"Sixty-two Syrian soldiers were killed and a hundred others were injured in these strikes."

The Russian military claimed two F-16 and two A-10 jets flew into Syrian airspace from neighbouring Iraq to carry out the strikes.

Syrian regime forces also said coalition aircraft carried out the strike near Deir Ezzor airport while Britain-based monitor the Syrian Observatory for Human Rights said at least 80 soldiers were killed, but it did not specify who carried out the raids.

Following the airstrike, Russia and Syria called for intervention of the United Nations Security Council.

"We are reaching a really terrifying conclusion for the whole world: That the White House is defending Islamic State. Now there can be no doubts about that," the RIA Novosti news agency cited Zakharova as telling the Rossiya-24 TV station.

"We demand a full and detailed explanation from Washington. That explanation must be given at the U.N. Security Council."

The incident occurred as the United States and Russia accused each other of not adhering to conditions of the truce which took effect earlier this week.

In New York, the UN Security Council cancelled an urgent meeting on Friday that had been called to discuss whether to endorse the ceasefire, seen as a "last chance" to end the five-year war which has killed 300,000 people.

The closed-door consultations were called off after Moscow and Washington failed to agree over disclosing details of the ceasefire to the council.

On Saturday, Russia said that the United States would have to be blamed for any breakdown of the ceasefire. Senior Russian army general Viktor Poznikhir said in a televised briefing:

If the American side does not take the necessary measures to carry out its obligations... all responsibility for a breakdown of the ceasefire will be on the United States

On the other hand, the United States held Russia responsible for delays in delivering aid to desperate civilians, especially in Aleppo.

Kerry told Lavrov that Washington "expects Russia to use its influence on the Assad regime to allow UN humanitarian convoys to reach the battleground northern city of Aleppo and other areas in need," Kirby said.

He added that the United States would not set up a planned joint US-Russian military coordination cell in Syria until regime forces there allow aid into besieged cities.

A key plank of the truce deal was the delivery of aid to areas including Aleppo, where an estimated 250,000 people in rebel-held areas of the city are living under the regime siege.

Under the deal, the main route into Aleppo, the Castello Road, should be demilitarised and aid convoys would enter from Turkey.

But 40 trucks carrying urgently needed food aid were still stuck on the border with Turkey on Saturday.

"Still no progress, but the UN is ready to move once we get the go ahead," said David Swanson, a spokesman for the UN Office for the Coordination of Humanitarian Affairs.

The UN has said it cannot deliver aid until "all guarantees are in place for safe delivery."

Fighting erupted overnight between rebel groups and pro-regime forces in the opposition-held suburb of Eastern Ghouta, near Damascus, according to the Syrian Observatory for Human Rights.

Air strikes hit several towns in the central province of Homs and also targeted opposition groups, including fighters from the Fateh al-Sham Front, in the coastal province of Latakia, according to the British-based monitor.

On Friday air strikes killed three civilians, including two children, in the rebel-held town of Khan Sheikhun in Idlib Province, the Observatory said. 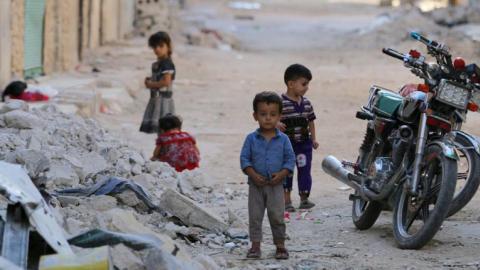 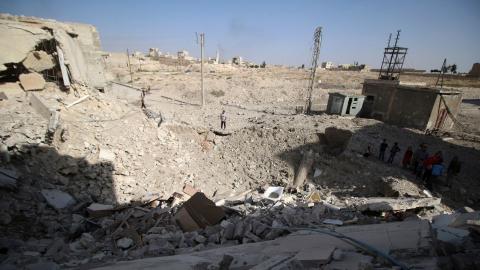