Syrian opposition and regime meet for talks in Geneva

This week is the first time Syrian regime and opposition delegates return to Geneva since UN-sponsored peace talks were suspended last April.

Syrian negotiators came face to face under the UN flag for the first time in three years on Thursday in Geneva, where UN mediator Staffan de Mistura opened a new round of political negotiations in a bid to end the almost six-year conflict. The talks are the first UN-mediated negotiations on Syria in almost a year.

"I ask you to work to work together. I know it's not going to be easy to end this horrible conflict and lay the foundation for a country at peace with itself, sovereign and unified," he told the delegates, who sat across from each other on a raised platform in a UN assembly hall, watched by diplomats.

After his opening address, de Mistura shook hands with representatives from both sides, and they left the hall for further talks.

TRT World's Sarah Morice is following the developments from Geneva.

It was not clear if the two sides would meet for direct talks, but on Wednesday Syria's main opposition delegation called for direct discussions with representatives of the Assad regime.

Syrian opposition High Negotiations Committee (HNC) spokesman Salem al-Muslat has already criticised the regime's delegation, saying they have no intentions of negotiating a political transition, but they intend to "buy time and commit more crimes in Syria."

The military and geopolitical context in the war, which has killed around 400,000 and made millions more homeless or refugees, has changed massively since the last talks almost a year ago.

A fragile ceasefire which excludes Daesh was put into place two months ago by Turkey and Russia at talks in the Kazakh capital Astana. It helped lay the groundwork for the resumption of the Geneva talks, despite each side blaming the other for repeated violations.

UN mediator Staffan de Mistura said he did not expect an immediate breakthrough when the peace talks resume on Thursday.

De Mistura said Russia, which has supported the regime's advances, had asked the regime to "silence their own skies in the areas touched by the ceasefire" during the talks.

Countries close to the opposition were also asked to urge their allies on the ground to lessen provocations, he said.

On the ground in Syria

The British-based Syrian Observatory for Human Rights said regime air strikes killed 11 opposition fighters and five civilians, including a journalist in its latest attacks on Hama.

Despite an overall escalation in ceasefire violations, SOHR said the level of violence in western Syria was somewhat less than in previous days.

Turkey's military on Thursday said Turkey-backed rebel forces and US-led coalition air strikes on Wednesday killed 56 Daesh militants in and near the Syrian town of al-Bab, a former Daesh stronghold which is now largely under opposition control, according to Ankara.

According to the military, Turkish artillery hit 104 Daesh targets, including buildings and bombed vehicles.

Al-Bab, 30 kilometres from the Turkish border, has been a prime opposition target since Turkey launched an operation with Syrian rebels last August to push Daesh from its frontier.

Operation Euphrates Shield is also aimed at preventing gains by the US-backed YPG, the armed wing of the PYD, the Syrian affiliate of the PKK, which Turkey, the US and EU consider a terrorist organisation. 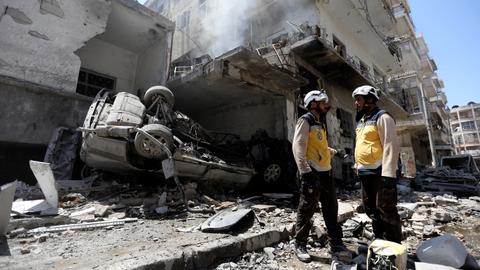