Regime forces continue to advance eastwards towards the Deir al Zor province, which is almost entirely under Daesh control.

Syrian regime forces and their allied militias have taken the last major town in Homs province from Daesh, the Syrian Observatory for Human Rights said on Saturday.

The town of al Sukhna lies some 50 km (30 miles) northeast of the ancient city of Palmyra, which was captured by regime forces in March.

A media unit linked to the Lebanon-based Hezbollah group said regime and allied forces were making considerable progress inside the city of Sukhna.

Hezbollah is backed by Iran and fights on the side of Syrian regime leader Bashar al Assad in the country's six-year conflict.

The regime's news agency SANA reported earlier on Saturday that Assad's forces were advancing into al Sukhna from three directions.

Daesh is losing ground fast in Syria to separate campaigns waged by the Russian-backed Syrian regime on the one hand, and to the US-backed Syrian Democratic Forces (SDF) and their allies on the other.

The SDF is largely comprised of the PKK affiliated YPG. The group enjoys US backing despite the PKK being listed as a terror organisation by Washington.

Syrian regime forces, backed by the Russian air force and Iran-backed militias, have also been advancing against Daesh in the Hama province and in southern areas of the Raqqa province. 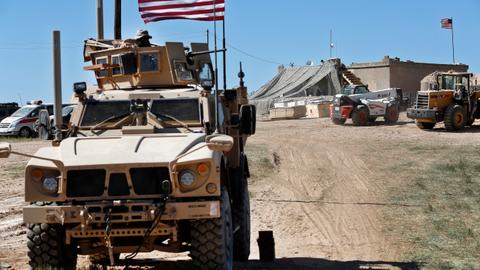