Syrian regime forces fired tear gas and live ammunition into Hama prison on Friday as they tried to put down a revolt by its inmates, a monitoring group said, with an opposition source saying some prisoners had choked from the fumes.

The prison has been surrounded by regime forces since hundreds of prisoners rioted and seized several guards on Monday, the Syrian Observatory for Human Rights said. Friday's fighting was the second attempt to storm the prison in the western part of the country, the Britain-based group reported.

Earlier on Friday negotiations had led to the release of dozens of prisoners, the Observatory reported.

A Syrian opposition official in contact with prisoners said security forces had fired an unidentified gas into the facility, causing 25 cases of suffocation but no deaths.

The Syrian Network for Human Rights reported that at least seven suffocation incidents as regime forces fired tear gas into the prison.

Pro-opposition posted footage on social media which they claimed to be from inside the prison. The footage showed men apparently suffocating, with a voice of a person in panic saying "Hama prison is dying ….. poison gases."

The official said Syria's main opposition body, the High Negotiations Committee, had informed the United States and the UN's Syria envoy about the situation. The HNC earlier said it held the international community responsible for a "massacre" of inmates it expected regime forces to carry out.

Syrian regime officials has denied "reports ... about Hama central prison," but have not elaborated on the issue since Monday.

Syrian rebel groups, including Ahrar al Sham, threatened to shell all the bases of regime forces in Hama Province if the regime did not meet the demands of the inmates.

The prisoners rioted to protest the attempted transfer of some of them to Sednaya military prison, north of Damascus, and because trials had been postponed, the Observatory said. The HNC said they wanted better conditions in jail.

Cases of suffocation on the first floor in #Hama prison after tear gas &shooting #SaveThePrisonersOfHamaPrison pic.twitter.com/Sz2AyOBPdM

The Syrian National Coalition condemned the regime offensive on the prison of Hama and warned them of a massacre by the regime against the inmates. Activists on social media have launched #SaveThePrisonOfHamaPrison hashtag in both English and Arabic.

Those held in the jail include political prisoners. International rights groups say thousands of detainees are held in Syrian regime prisons without charge and many of them are subjected to torture, a claim denied by the authorities.

The Syrian conflict began in 2011 with popular protests against Bashar al Assad, and spiralled into civil war after a crackdown by regime forces. 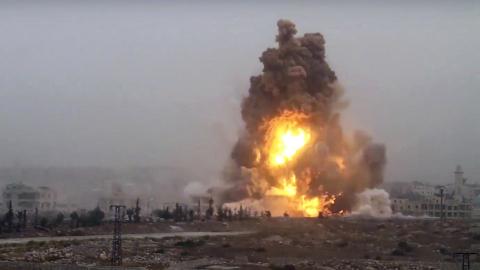