A World Health Organization official says 70 percent of the supplies loaded on its trucks were removed by Bashar al Assad's regime forces during inspection.

Syrian regime forces removed trauma kits and surgical supplies from trucks that are part of an inter-agency convoy heading into the besieged Syrian enclave of eastern Ghouta, a World Health Organization (WHO) official said on Monday.

"All trauma (kits), surgical, dialysis sessions and insulin were rejected by security," a WHO official said in an email to Reuters, adding that some 70 percent of the supplies loaded on its trucks leaving its warehouses had been removed during the inspection.

The statement from WHO came just hours after the Syrian Observatory for Human Rights (SOHR) said fresh raids by the regime on the opposition-held enclave killed at least 14 civilians on Monday.

The Britain-based SOHR said barrel bombs – crude, improvised munitions that cause indiscriminate damage – were used, including on the town of Hammuriyeh, where 10 people were killed.

TRT World's Alaattin Kilic reports from Kilis, Turkey, on the border with Syria.

The latest deaths brought to 709 the number of civilians killed since regime and allied Russian forces intensified their campaign against eastern Ghouta in February.

SOHR said earlier that regime forces had advanced to within three kilometres of Ghouta's main town, Douma, after retaking "more than 25 percent" of the enclave.

The deadly raids, as well as other strikes and rocket fire elsewhere in eastern Ghouta on Monday, came as the battered enclave awaited a convoy of humanitarian aid from the United Nations.

Regime-backer Russia last week announced daily five-hour "humanitarian pauses" in eastern Ghouta. But while the air campaign has eased, fighting has intensified on the ground.

Encircled by regime-controlled territory and unable or unwilling to flee, eastern Ghouta's 400,000 residents have suffered one of the most ferocious assaults of Syria's civil war.

Under siege since 2013, they had already been facing severe shortages of food and medicine. The region's over-burdened medical workers have been struggling to cope.

The UN's regional humanitarian coordinator for Syria, Panos Moumtzis, sounded the alarm over the increased violence.

"Instead of a much-needed reprieve, we continue to see more fighting, more death, and more disturbing reports of hunger and hospitals being bombed," he said.

"This collective punishment of civilians is simply unacceptable." 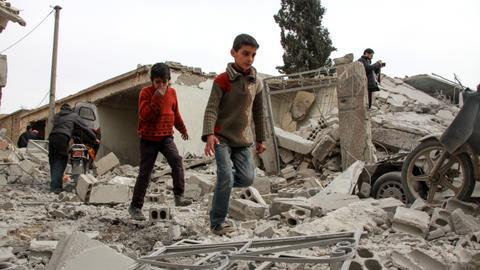