A number of nations, including the Unites States, Turkey, UK, France, Iran, Russia, Saudi Arabia, other Gulf allies of the US and the Syrian regime, are involved in the Syrian conflict.

Nearly 100 civilians, mostly women and children, were killed in US-led air strikes conducted early on Tuesday morning in the northern Syrian village of Tokhar, part of the city of Manbij in the governorate of Aleppo.

The strikes, were described as an "error" by the director of the Britain-based Syrian Observatory for Human Rights, Rami Abdel Rahman, "with the civilians being mistaken for DAESH terrorists".

The coalition has acknowledged conducting air strikes near Manbij recently, and said it was looking into the reports of civilian deaths.

"We will conduct an investigation on any possible civilian casualties in this matter, as we always do, and we'll be transparent about that," US Defence Secretary Ashton Carter said on Wednesday.

The head of the opposition Syrian national coalition appealed to the US-led coalition to halt its air strikes.

The raids also drew condemnation from the UN's children agency, which said that "more than 20 children were reportedly killed" in the raids on Tokhar.

The latest incident, involving a high number of civilian casualties, is not the first of its kind since the beginning of violence in Syria almost five years ago.

Given the nature of the conflict and the number of forces involved in the Syrian conflict, it does not seem that the spiral of violence will end any time soon.

Be it attacks by DAESH, strikes by the US-led coalition forces or the Russian and Iran-backed regime, it is the civilians who suffer the most casualties.

Around 470,000 Syrians have been killed and 1,900,000 others injured, which made up nearly 11.5 percent of the Syrian population, in the five-year-old war, according a report issued by the Syrian Center for Policy Research earlier this year.

Given below is a chronological list of deadliest attacks to have taken place in Syria during the past year:

The Syrian Observatory for Human Rights reported that 31 civilians, including children, were killed in airstrikes and shelling most likely carried out by Russian forces or Bashar al-Assad's regime in Rastan and Ariha towns of Syria.

Both towns are controlled by forces opposed to the incumbent Syrian regime.

Bomb blasts killed scores of people and wounded many others on May 23 this year in the government-controlled territories of Jableh and Tartous on Syria's Mediterranean coast that hosts Russian military bases.

DAESH terrorists claimed responsibility for the attacks, in what is Syrian President Assad's coastal heartland. State media said 78 people had been killed in the explosions.

The Britain-based Syrian Observatory for Human Rights said 145 people were killed in attacks by at least five suicide bombers and two devices planted in cars.

At least 47 people were killed in airstrikes on the Medecins Sans Frontieres (MSF)-backed al Quds hospital and a nearby residential building in the opposition-held Syrian city of Aleppo on April 27, 2016.

The United Nations, MSF and the US condemned the attack. Those killed included 27 patients, doctors and staff, the Syrian Observatory for Human Rights said.

Three doctors, one of whom was the last paediatrician in the city, were among those killed, the monitor added.

At least 30 civilians were killed in regime and rebel bombardment of areas across Syria on April 23, 2016.

Twelve civilians were killed in air strike on the northern metropolis of Aleppo on Saturday, a local civil defence official said.

The Syrian Human Rights Observatory said 13 others died in shelling of the rebel-held town of Douma, east of Damascus, while two men were killed in regime air strikes on Talbisseh in the central Homs province.

Airstrikes on schools, hospitals kill 50 in Allepo and Idlib, February 15, 2016:

A hospital supported by French medical charity organisation, Doctors Without Borders, also known as Medecins Sans Frontieres (MSF) in the town of Idlib was one of the targets.

Fourteen people were killed in the town of Azaz near the Turkish border when missiles slammed into a school sheltering families fleeing the offensive and a children's hospital, two residents and a medic said.

Bombs also hit another refugee shelter south of the town and a convoy of trucks, another resident said. Two children were also among the dead.

At least 60 people, including 25 Shiite militiamen, were killed and scores wounded in three bomb blasts near the Sayeda Zeinab shrine outside the Syrian capital Damascus.

A car bombing and twin suicide blasts had hit the main Shiite neighbourhood of the Syrian capital, Damascus. The attack was claimed by DAESH.

At least 39 people were killed in the air strike, which hit a court house and adjoining prison in the town of Maarat al-Numan in Idlib province.

The strikes were conducted while a UN envoy was visiting Damascus to advance preparations for peace talks planned later during the month.

Air strikes carried out by Russian warplanes kılled more than 40 people in the centre of the rebel-held city of Idlib in northwest Syria on Sunday, rescue workers and residents said.

They said at least six strikes had hit a busy market place in the heart of the city, several government buildings and residential areas. Rescue workers said they had confirmed 43 dead but that at least 30 more bodies had been retrieved that had still to be identified.

Over 150 people were wounded with some of the serious cases sent to hospitals in Turkey.

At least 91 people, including 17 children, were killed on Friday in attacks on opposition strongholds in the north and outside Damascus, the Syrian Observatory for Human Rights said.

Of the 91, at least 59, including five children and two women, died in government attacks on Douma, a town on the eastern edges of the capital.

Around 32 civilians, among them 12 children, were killed in air strikes on Syria's second city Aleppo.

A Syrian government air strike in Douma, northeast of Damascus, killed around 100 people in a marketplace August 16, 2015, rescue workers in the rebel-held area and the Syrian Observatory for Human Rights said.

After rescue workers arrived following an initial attack, the warplanes bombed the area again. The dead included many children.

Around 200 more people were wounded in the attack, which had sparked global outcry in its aftermath. 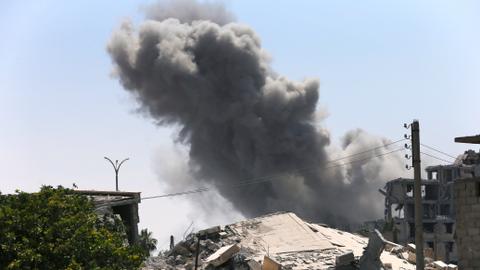