Turkey warns US against treating YPG as an ally in Syria

President Recep Tayyip Erdogan says those who "justify terrorist organisations for the sake of regional policies … will soon realise they made a mistake" as the US-backed YPG-dominated SDF continues its operation against Daesh in Raqqa.

As the US-backed Syrian Democratic Forces' (SDF) final push against Daesh in Raqqa continued on Wednesday, a day after they made their first incursion inside the terrorist group's de facto Syrian capital, Turkey warned the US against mistaking the group as an ally.

"Those who justify terrorist organisations for the sake of their regional policies by depicting them as militia, instead of taking a decisive stance, will soon realise they made a vital mistake," said Turkish President Recep Tayyip Erdogan.

Turkey has been critical of the US decision to arm and fight alongside the SDF, which is dominated by the YPG, the armed wing of the PYD, which is a Syrian affiliate of the PKK, a group listed as a terrorist organisation by Turkey, the US and EU.

TRT World 's Alican Ayanlar has more on the situation in Raqqa.

Daesh captured Raqqa from rebel groups in 2014 and have used it as an operations base to plan attacks in the West.

An SDF spokesperson on Tuesday said the assault to retake Raqqa had begun from the north, east and west of the city.

Turkey's prime minister said any threat to the country would be instantly countered.

"We will never allow any issue to pose an internal threat to Turkey. If we face any … threat to our security from Raqqa or any point in that region, we instantly give the required response," Binali Yildirim said on news of the SDF operation to drive Daesh from Raqqa.

"Despite all of our warnings… our ally and friend the United States unfortunately cooperated with terrorist groups with the idea that they would demolish another terror group.

Turkey has called on the US to abandon its support for the SDF and throw its weight behind the Free Syrian Army which Ankara supports in the north of the country and for the Raqqa operation.

The operation in Raqqa comes as the US-led anti-Daesh coalition said it struck Bashar al Assad-allied forces in a "de-confliction zone" in southern Syria on Tuesday.

The strikes happened after Iran-backed forces advanced on an area where the US is training partner forces, in a new escalation of tension between Washington and troops supporting Damascus.

The strikes were carried out after a convoy that included "a tank, artillery, anti-aircraft weapons, armed technical vehicles and more than 60 soldiers" ignored repeated warnings, the coalition said in a statement.

The forces posed a threat to coalition and allied forces based at a garrison in the southeastern Syrian border town of Tanf as they violated what the coalition called a "well-established de-confliction zone."

Two artillery pieces and an anti-aircraft weapon were destroyed, and a tank was damaged, according to the coalition.

The coalition said it does not seek confrontation with the "Syrian regime or pro-regime forces," but stressed it is ready to defend its troops and partners "if pro-regime forces refuse to vacate the de-confliction zone.

"The Coalition calls on all parties in southern Syria to focus their efforts on the defeat of ISIS [Daesh], which is our common enemy and the greatest threat to regional and worldwide peace and security," the coalition added in a statement.

The pro-Assad military alliance responded by saying that it has been exercising self-restraint over US strikes and that it would not last if the US crosses "red lines."

The threat came in a statement in the name of the "commander of the operations room of the forces allied to Syria," and was circulated by a military news unit run by the Lebanese group Hezbollah, one of Assad's militia allies.

America knows well that the blood of the sons of Syria, the Syrian Arab Army, and its allies is not cheap, and the capacity to strike their positions in Syria, and their surroundings, is available when circumstances will it,

The coalition previously struck pro-regime forces on May 18 under circumstances that it described similarly to what it said unfolded on Tuesday. 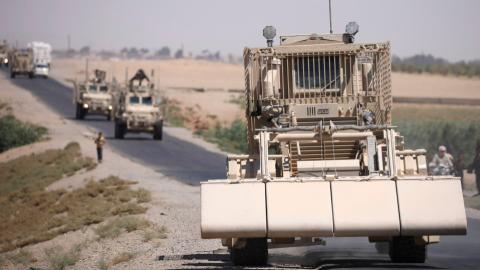