In a written statement on Sunday, the Turkish Foreign Ministry said their objections were brought to McGurk's attention at a high-level demarche, and his comments, which were characterised as provocative, were rejected:

"McGurk was reminded of both the fact that the root causes enabling terrorist organisations to find a foothold in Syria and Iraq could be eradicated only if the deeds and actions of all relevant actors do not contradict one another, and our expectation is that the Syria-based terrorist organisation PYD/YPG is not supported for whatever the reason may be."

Brett McGurk spoke at the Middle East Institute on Thursday, discussing the fight against Daesh in Iraq and Syria. He then mentioned Al Qaeda's presence in Idlib. He asked how the leaders of Al Qaeda got into Idlib first, blamed some of their partners without giving any names, and then he said they would hold discussions about it with Turkey:

"Idlib province is the largest Al Qaeda safe haven since 9/11 ... This is a huge problem ... But we have to ask a question: Why and how is Ayman al Zawahiri's [leader of Al Qaeda] deputy finding his way to Idlib province? Why is this happening? How are they getting there? They are not paratroopers … The approach by some of our partners to send in tens of thousands of tons of weapons and looking the other way as these foreign fighters come in to Syria may not have been the best approach. And Al Qaeda has taken full advantage of it. And Idlib now is a huge problem. It is an Al Qaeda safe haven right on the border of Turkey. So that's something, obviously, we will be in very close discussions with the Turks on."

Turkey and the US have been at odds for years regarding US support of the PYD in Syria. PYD is the Syrian affiliate of PKK, which has been fighting Turkey for more than 30 years, and is designated as a terrorist organisation by Turkey, the US and the EU.

The PYD and its armed wing, the YPG, has been used by the US in the fight against Daesh and now controls most of northern Syria, on Turkey's border. McGurk is the diplomat who has been coordinating with the PYD and has been frequently seen at YPG bases in Syria.

In May, the Turkish Foreign Minister demanded the US remove McGurk from the post. 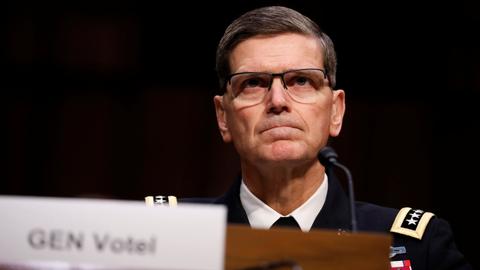