Cavusoglu will be heading to Saudi Arabia on Friday to hold talks on the Qatar dispute.

Speaking at a joint press conference in Ankara with his Tunisian counterpart Khemaies Jhinaoui, Cavusoglu said that Turkey maintained its impartiality in the spat and was pushing ahead with efforts to solve it.

"We want to hear the views of Saudi Arabia regarding possible solutions and will share with them our views in a transparent way ... We pay a great attention to our relations with them," he said.

Saudi Arabia, Egypt, the United Arab Emirates and Bahrain have broken off ties and imposed an economic blockade on Qatar, accusing it of supporting terrorism and courting regional rival Iran - allegations Doha denies.

Gulf states and Egyptian transport ministers are meeting at the UN aviation agency's headquarters in Canada, in what is their first direct talks since a diplomatic row erupted last week that led to the economic blockade of Qatar.

International Civil Aviation Organisation (or ICAO) - a UN agency that regulates international air travel under the Chicago Convention - said that the talks would seek a "consensus-based solution" that addressed "current regional concerns."

Qatar had asked ICAO to intervene after its Gulf neighbours closed their airspace to Qatar flights.

"This blockade is unprecedented, and it is in direct contradiction to the convention that guarantees rights to civil overflight. We call upon ICAO to declare this an illegal act. We are not a political body, we are an airline, and this blockade has stripped us of the rights which are guaranteed to us," Qatar Airways Group Chief Executive Akbar Al Baker said on Wednesday.

Saudi Arabia, the UAE, Bahrain and Egypt last week severed diplomatic relations with Qatar, accusing it of support for militants and Iran. The UAE has also decided to blacklist Qatari individuals and entities.

Most of the officials attending the meeting are expected to be transport ministers, an ICAO representative said earlier on Wednesday.

ICAO has rarely intervened in disputes between states, especially involving overflights, which are governed by a separate international agreement from the Chicago pact that created the UN aviation agency.

In 1971, India closed its airspace to Pakistan in a row over the controversial hijacking of a plane by Kashmir rebels. India complained to ICAO that its rights had been infringed under both post-World War II aviation agreements – the Chicago Convention and the separate International Air Transit Services Agreement, which guarantees transit rights.

The ICAO Council, however, merely encouraged the two sides to settle their differences, according to a history of the agency by Canadian academic David Mackenzie.

Qatar said on Thursday that its rift with fellow Gulf Arab states has not affected its preparations to host the 2022 World Cup, adding that alternative sources for construction materials had been secured.

"I can confirm to everybody that there is absolutely no impact on the progress of work in the Mondial facilities and that work is proceeding normally," said Ghanim al-Kuwari, executive director at the Qatari committee overseeing preparations for the World Cup.

#Qatar Emir chaired the @roadto2022 meeting. We're ready for the the 1st World Cup in MENA, which will be a catalyst for peace in the region https://t.co/hrUxyYRHPp

Meanwhile, the International Olympic Committee (IOC) said on Thursday that it hoped the diplomatic and economic boycott of Qatar by its Gulf neighbours would not affect sports development in the region.

"In the world of sport we remain politically neutral and continue our relationships with all the National Olympic Committees (NOCs) in the region," IOC spokesman Mark Adams said.

"We hope for this even more, because all of the NOCs in the region are very active in Olympic sports in different respects and we appreciate especially how much is being contributed to sport development in the region," Adams said. 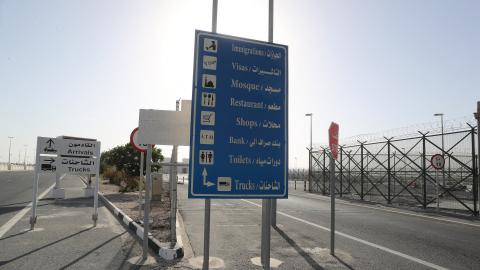