FSA fighters close in on al Bab district, and Daesh is reported to have retreated as they prepare for a major battle ahead.

In what appears to be the beginning of a major battle in northern Syria, Turkish jets on Sunday hit 15 Daesh targets in al Bab as part of Operation Euphrates Shield, a day after the Free Syrian Army (FSA) pushed its way into the Daesh-controlled district.

As Turkish-backed FSA fighters entered the district, Daesh is reported to have retreated to prepare for a major battle ahead. Turkey launched the ongoing cross-border offensive on August 24 to oust Daesh and YPG terrorists from its border with Syria.

The YPG is a Syrian wing of PKK which is recognised as a terrorist organisation by the US, EU and Turkey.

Turkish President Recep Tayyip Erdogan had said seizing control of al Bab, around 30 km (19 miles) south of the border, was a goal of the operation before targeting Manbij. But FSA fighters have recently driven Daesh out of that city.

The latest strikes by Turkish warplanes hit 10 Daesh positions and command centres, and destroyed an ammunition store. Nine FSA fighters were killed during clashes in the region.

FSA members had arrived within 2 km (1.4 miles) of al Bab late on Saturday. They were able to liberate six villages: Hazvan, Susyan, Aldana, Kiyran, Uglan and Avlan and other residential areas from Daesh by 1100GMT on Sunday, putting them close to al Bab.

Almost 1,600 square kilometers (617 square miles) of land in northern Syria has been cleared of Daesh since the launch of Operation Euphrates Shield. 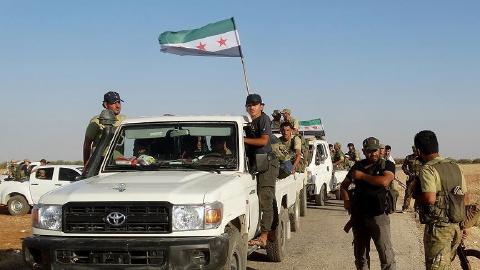