UAE steps up pressure on Qatar as it threatens more curbs

1
Lebanon faces more blackouts as generators run low on fuel
2
For Iranians, the US seizure of Iran-linked websites is a draconian move
3
Poll shows many Democrats want more US support for Palestinians
4
Battle for Yemen's Marib flares up as 90 fighters killed in two days
5
Why does Israel refuse to return the bodies of slain Palestinians?

The United Arab Emirates said Qatar needs to make "iron-clad" commitments to change policies on funding militants but not to change "its regime." Meanwhile, Turkey looks to fast-track a law to send more troops to the Qatar base.

The United Arab Emirates tightened the squeeze on fellow Gulf state Qatar on Wednesday amid a rolling crisis as Minister of State for Foreign Affairs Anwar Gargash threatened more curbs if necessary.

Any efforts to defuse the regional crisis, which snowballed on Monday when the UAE, Saudi Arabia, Egypt and others severed diplomatic ties with Qatar over alleged support for terrorism and Iran, showed no immediate signs of success.

The UAE also threatened its own people publishing expressions of sympathy towards Qatar with up to 15 years in prison, and barring Qatari passport or resident visa holders entry.

As the Qatar crisis continues to spiral, Turkey has offered to mediate and is now trying to fast-track legislation to send more of its troops to a Turkish base in the Gulf state.

Qatar, which is dependent on the Saudi route for its food exports, also turned to Turkey and Iran for food supplies.

The Turkish exporters association said on Wednesday that they are ready to meet demand for food and water from Qatar. This could allow the Gulf state to stave off possible shortages after its biggest suppliers cut ties.

US President Donald Trump took sides in the rift on Tuesday, praising the actions against Qatar, but later spoke by phone with Saudi King Salman and stressed the need for Gulf unity.

His defence secretary, James Mattis, also spoke to his Qatari counterpart to express commitment to the Gulf region's security. Qatar hosts 8,000 US military personnel at Al Udeid, the largest US air base in the Middle East and a launch pad for US-led strikes on Daesh.

Kuwait's emir has been seeking to mediate, meeting Saudi's king on Tuesday.

UAE-based newspaper Gulf News and pan-Arab channel Al Arabiya reported the crackdown on anyone in the UAE expressing sympathy with Qatar.

"Strict and firm action will be taken against anyone who shows sympathy or any form of bias towards Qatar, or against anyone who objects to the position of the United Arab Emirates, whether it be through the means of social media, or any type of written, visual or verbal form," Gulf News quoted UAE Attorney-General Hamad Saif al Shamsi as saying.

On top of a possible prison term, offenders could also be hit with a fine of at least 500,000 UAE dirhams ($136,000), the newspaper said, citing a statement to Arabic-language media.

Since the diplomatic row erupted, slogans against and in support of Qatar have dominated Twitter in Arabic, a platform used widely in the Arab world, particularly in Saudi Arabia.

Newspapers and television channels in the region have also been engaged in a war of words over Qatar's role.

The UAE's state-owned Etihad Airways, meanwhile, said all travellers holding Qatari passports were currently prohibited from travelling to or transiting through the emirates on government instructions.

Foreigners residing in Qatar and in possession of a Qatari residence visa would also not be eligible for visa on arrival in the UAE, Etihad spokesman said in an email. "This ruling applies to all airlines flying into the UAE," the spokesman said in the statement.

Those breaking ties with Qatar are the UAE, Saudi Arabia, Egypt, Bahrain, the Maldives, Mauritania and Libya's eastern-based government. Jordan has downgraded its diplomatic representation and revoked the licence of Doha-based TV channel Al Jazeera.

Qataris were loading up on supplies in supermarkets, fearing shortages. But financial markets were relatively calm after some recent jumps.

"Tensions are still high and mediation efforts by fellow Gulf Cooperation Council state Kuwait have yet to lead to a concrete solution, so investors will likely remain on edge," said one Dubai-based trader.

Qatar has said it will not retaliate against the curbs.

"We are willing to sit and talk," Qatari Foreign Minister Sheikh Mohammed bin Abdulrahman al Thani told CNN late on Tuesday. He said his country was "protecting the world from potential terrorists."

A Qatari official, however, said the rift was pushing Doha in the direction of leaving the six-state Gulf Cooperation Council, "with deep regret."

Bans on Doha's fleet using regional ports and anchorages are threatening to halt some of its exports and disrupt those of liquefied natural gas.

Traders on global markets worried that Riyadh's allies would refuse to accept LNG shipments from the gas-rich Gulf state, the world's largest liquefied natural gas exporter, and that Egypt might even bar tankers carrying Qatari cargoes from using the Suez Canal as they head to Europe and beyond. 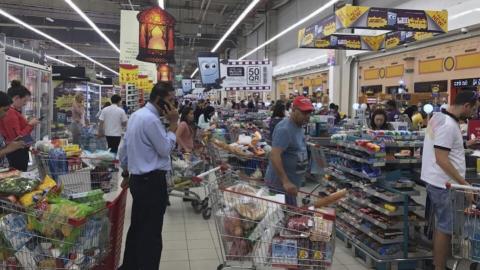 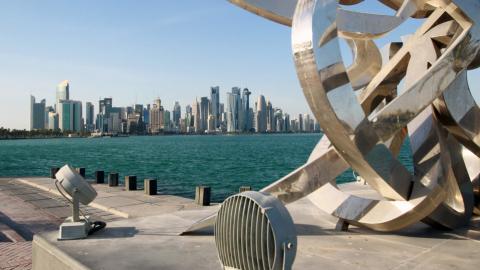 1
Lebanon faces more blackouts as generators run low on fuel
2
For Iranians, the US seizure of Iran-linked websites is a draconian move
3
Poll shows many Democrats want more US support for Palestinians
4
Battle for Yemen's Marib flares up as 90 fighters killed in two days
5
Why does Israel refuse to return the bodies of slain Palestinians?