UN calls for probe into Saudi-led strikes in Yemen

The UN human rights office says Saudi-led air strikes are responsible for 60 percent of killings of civilian in Yemen since May 2015 and has called for an international probe into the incidents.

The UN human rights office on Thursday called for the creation of an international body to investigate Saudi-led coalition air strikes over human rights violations, including attacks on protected sites such as hospitals.

Air strikes by the Saudi-led coalition are responsible for the deaths of some 60 percent of the 3,799 civilians killed since March 2015, and the country has committed other violations that may contravene international law, the office said in a report.

Though the coalition had shared findings from its own internal investigations, "more transparency" was needed, Mohammad Ali Alnsour, chief of the Middle East and North Africa section of the UN human rights office, told a briefing in Geneva.

"The compensation of the victims is an important element but it is not the only element. We think there should be a kind of accountability and these violations not to be repeated again," he said.

The report also said that Houthi rebels and allied forces loyal to former President Ali Abdullah Saleh have also carried out violations in the war-torn country such as rocket and mortar attacks on residential areas and using landmines.

All sides are responsible (for violations). There was targeting of civilian objects ... like markets, like wedding ceremonies, hospitals, facilities that really under international humanitarian law is protected and have a special kind of legal protection.

In a statement, UN High Commissioner for Human Rights Zeid Ra'ad Al Hussein called for an international investigation into all grave violations, saying a national commission had focused mainly on Houthi violations and had not pursued any of the perpetrators.

Hussein said that Yemenis were suffering "unbearably [without] any form of accountability and justice, while those responsible for the violations and abuses against them enjoy impunity."

New report on the #humanrights situation in #Yemen: We call for accountability for violations https://t.co/FL60gTbRsg

But the UN stopped short of accusing either side of war crimes, saying it was for a national or international court to decide.

"We are investigating, monitoring the violations but we cannot decide that this a crime or not, this is for a tribunal or for a specific body to decide. We cannot have this assertion that there is a crime or war crime," Alnsour said, adding, "We are saying while conducting military operations there are specific principles should be respected to minimise civilian casualties." 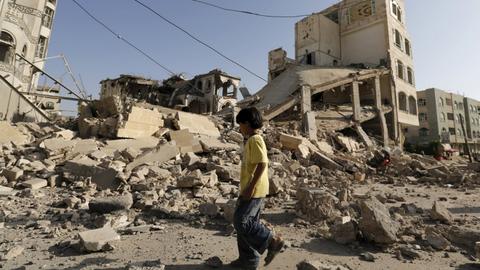