DAESH is trying to erase the ethno-religious identity of the Yazidis by forcing men belonging to the community to choose between conversion to Islam and death, raping girls as young as nine and selling women at slave markets, a UN report has stated.

DAESH has been carrying out a genocide of Yazidis in Iraq and Syria since August 2014, a United Nations commission has said in a report.

The 40-page report, which was released on Thursday, is based on interviews with dozens of survivors.

It said that the DAESH has been systematically capturing Yazidis in Iraq and Syria since August 2014, seeking to "erase their identity" in a campaign that met the definition of the crime as defined under the 1948 Genocide Convention.

"The genocide of the Yazidis is ongoing," the report declared.

Yazidis, a Kurdish-speaking non-Muslim community, belong to a religious sect whose beliefs combine elements of several ancient Middle Eastern religions. For centuries most of them have lived in Syria and northern Iraq, where they are concentrated around the town of Sinjar near Mosul.

Sinjar was overrun by DAESH, which captured Iraq's second most populated city Mosul during its sweeping summer campaign in northern Iraq in 2014.

DAESH, seeing Yazidis as heretics, systematically killed, captured or enslaved thousands of Yazidis when it overran Sinjar in August 2014.

Several mass graves have been uncovered after Peshmerga forces recaptured the town from DAESH in mid-November 2015.

Paulo Pinheiro, chairman of the commission of inquiry, told a news briefing: "The crime of genocide must trigger much more assertive action at the political level, including at the Security Council."

Commission member Vitit Muntarbhorn also said it had "detailed information on places, violations and names of the perpetrators," and had begun sharing confidential information with some national authorities, who were prosecuting foreign fighters.

But definitively naming DAESH leaders based on witness testimony is complicated because many use pseudonyms, the commission said.

Past moves to refer violations in Syria to the International Criminal Court have stalled in the UN Security Council.

The commission members voiced hope that this case would be different because DAESH is broadly reviled and does not have political support in the UN Security Council, unlike the Syrian regime.

The four independent commissioners urged major world powers to rescue at least 3,200 women and children still held by DAESH and to refer the case to the International Criminal Court (ICC) for prosecution.

"ISIS [DAESH] made no secret of its intent to destroy the Yazidis of Sinjar, and that is one of the elements that allowed us to conclude their actions amount to genocide," said another investigator, Carla del Ponte.

"Of course, we regard that as a road map for prosecution, for future prosecution," Ponte added.

DAESH has tried to erase the Yazidis' identity by forcing men to choose between conversion to Islam and death, raping girls as young as nine, selling women at slave markets, and forcing boys to fight, the report said.

"The scale of atrocities committed, their general nature, and the fact of deliberately and systematically targeting victims on account of their membership in a particular group, while excluding members of other groups, were other factors from which the Commission was able to infer genocidal intent," the report said. 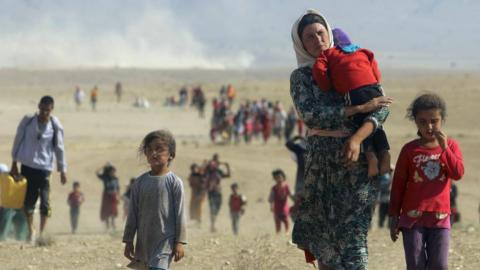 Yazidis plan a return to Sinjar where memories of massacre linger