UN says both sides in Aleppo may be committing war crimes

The United Nations also says that a "tank shell" hit its office in Aleppo, but does not mention any casualties or which side might be responsible for the attack.

Aleppo became the epicentre in Syrian civil war after the Syrian regime and Russia stepped up air strikes to take full control of the city. Opposition forces have also started a fresh offensive to breach the siege put by the regime.

"All parties in Aleppo are conducting hostilities that are resulting in large numbers of civilian casualties and creating an atmosphere of terror for those who continue to live in the city," Shamdasani said during a regular press briefing in Geneva.

According to the UN, more than 30 civilians died in strikes by mortars, rockets and other improvised explosive devices on regime-held western Aleppo over the weekend.

"The reported use of ground based missiles, along with the use of armed vehicles loaded with explosives, used in an area containing more than one million civilian inhabitants, is completely unacceptable and may constitute a war crime," Shamdasani said.

The number of civilian casualties suggested the opposition are ignoring the "fundamental prohibition" of indiscriminate attacks and the principles of precaution and proportionality, she added.

The United Nations said that a "tank shell" hit its office in Aleppo on Sunday, defacing the top floor of the building.

"It is appalling that the building that houses the UN offices was directly targeted," the top UN official in Syria, Ali Al-Za'tari, said in a statement on Monday.

The UN statement did not mention any people being hurt by the explosion. The statement did not specify how it was known to be a tank shell, rather than any other type of munition, or which side was responsible for firing the shell.

"We strongly condemn the increased violence in all of Aleppo, east and west, which has resulted in the death and injury of scores of civilians, including children."

Russia and Syrian regime have been repeatedly accused of war crimes for their deliberate attacks on civilians and medical facilities in Aleppo.

In September, an attack on an aid convoy carrying humanitarian relief to Syrians besieged in Aleppo killed at least 20 people. Russia and Syrian regime denied responsibility for the attack which the international community called a war crime.

UN security council has accused Russia and Syrian regime of war crimes for their widespread use of bunker-buster, a bomb designed to penetrate hardened targets or targets buried deep underground. 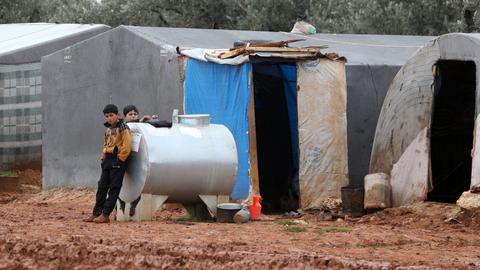 What are the major challenges facing Biden in the Middle East?