An Amnesty report says anyone who dares to speak out against the Egyptian authorities is at risk as the number of people who ‘disappeared' spikes.

Hundreds of people, some as young as 14, have been abducted and tortured by the Egyptian authorities to silence opponents, Amnesty International claimed in a report published on Wednesday.

"Enforced disappearance has become a key instrument of state policy in Egypt. Anyone who dares to speak out is at risk," Amnesty's Middle East and North Africa director, Philip Luther, said.

The London-based human rights group said abuses had surged since the military overthrew the country's first elected president Mohamed Morsi in 2013 and unleashed a crackdown on both political Islamist and secular dissidents.

The report, based on 70 interviews with former detainees, as well as their families, lawyers and others, said that enforced disappearances had spiked since the appointment of Interior Minister Magdi Abdel Ghaffar in early 2015, with an average of three or four people reported missing every day. Amnesty said many of those forcibly disappeared were held at Lazoughly, a detention centre run by Egypt's Homeland Security.

Children were among those being kept at undisclosed locations for up to several months at a time "to intimidate opponents and wipe out peaceful dissent," the report said.

The report documents 17 cases, including five children, who had disappeared for periods of "between several days to seven months."

One of them, Mazen Mohamed Abdallah, who was 14 in September, had been subjected to "horrendous abuse" including "being repeatedly raped with a wooden stick in order to extract a false 'confession'," Amnesty said.

Another child of the same age when arrested in January, Aser Mohamed, "was beaten, given electric shocks all over his body and suspended from his limbs in order to extract a false 'confession'," the human rights watchdog said.

Egyptian authorities have denied they practice torture, but say there have been isolated incidents of abuse and those responsible have been prosecuted.

The foreign ministry accused Amnesty International of bias in its report, which relies on "sources expressing one side, and people and quarters who are hostile to the Egyptian state, while ignoring the judiciary's treatment of the cases mentioned."

An interior ministry official who declined to be named said that there was "no such thing as enforced disappearances" in Egypt. He said the ministry had looked into all suspected cases. Each instance had proven that the individual in question was remanded in custody on the orders of a prosecutor.

The National Council for Human Rights, the country's official human rights watchdog, said on July 3 it had raised 266 cases of enforced disappearances with the interior ministry between April 2015 and the end of March.

Many of them have since been accounted for.

He accused them of being "prepared to lie to cover their tracks" or failing to investigate torture allegations, "making them complicit in serious human rights violations".

It said they were usually detained at their homes by heavily armed security personnel, adding that investigations were rarely opened when family members complained. 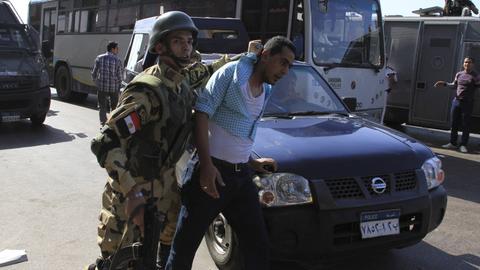