US air strike kills over 30 civilians in Syria: monitor

The London-based Syrian Observatory for Human Rights says its activists counted at least 33 bodies at the site of the strike near the village of al-Mansoura, west of Raqqa.

At least 33 people were killed by a US-led coalition air strike on a school used as a shelter for displaced civilians near a Daesh-held Syrian town, a war monitor said on Wednesday.

The Syrian Observatory for Human Rights (SOHR) said the strike south of Al-Mansoura, a town held by the Daesh in the northern province of Raqqa, "took place in the early hours of Tuesday."

"We can now confirm that 33 people were killed, and they were displaced civilians from Raqa, Aleppo and Homs," said Observatory head Rami Abdel Rahman.

The attack comes a week after another US air strike reportedly hit a mosque in the rebel-held village of Al Jina in Syria's northwestern Aleppo province. At least 42 people were killed and dozens injured in the mosque attack. The US military denied that it hit the mosque. 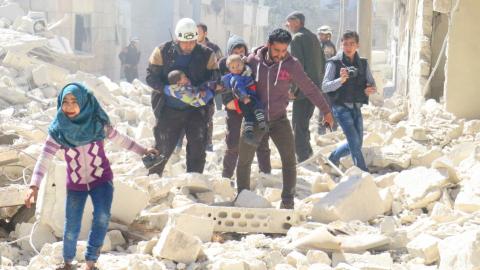