James Mattis arrived in the Iraqi capital on Monday, as US-back Iraqi forces entered day two of their campaign to take western Mosul from Daesh.

US Defense Secretary James Mattis arrived in Baghdad on Monday on an unannounced visit as the battle to oust Daesh from western Mosul entered day two.

According to the coalition military, the operation is having measured success.

A top Iraqi commander said his forces, backed by jets and helicopters, were converging on Mosul airport.

TRT World spoke with journalist Ammar Karim in Baghdad for this update on Monday's developments.

Mattis's key goal during the visit is to speak about military operations with political leaders and commanders on the ground, including his top commander in Iraq Lieutenant General Stephen Townsend.

The defence secretary now has a week left to offer US President Donald Trump a new plan for escalating the fight against Daesh.

Mattis has been talking with military leaders about the possible options and has largely supported the US strategy of fighting Daesh with and through local forces.

"We're going to make certain that we've got good situational awareness of what we face as we work together and fight alongside each other," Mattis told reporters travelling with him.

Mattis also distanced himself from Trump's comments at the CIA headquarters and earlier during his presidential campaign about taking Iraqi oil.

"We're not in Iraq to seize anybody's oil," he said, reassuring reporters America has always paid for its oil and gas.

In addition to gains made in taking the airport, Iraqi forces said they also captured a dozen villages from Daesh pushing into western Mosul from the south on Sunday.

In a statement, Iraqi forces say they have killed nearly 80 Daesh militants and destroyed 13 Daesh vehicles.

But the real fight for west Mosul still lies ahead in the city's airport and military camp of al-Ghazlani which are just to the south of Mosul.

Iraqi fighters are close to the two strategic areas but first they have to capture the nearby town of Abu Saif.

The operation to take western Mosul follows the recapture of the eastern part of the city divided by the Tigris river.

Iraq's elite Counter-Terrorism Service took two months to retake the east of the city, where Daesh put up stiffer than expected resistance.

But the battle for the western bank of the Tigris and city is expected to be even tougher.

"We call on our brave troops to start the push to liberate the people of Mosul from Daesh oppression and terrorism forever," al-Abadi said.

Up to 400,000 civilians could be displaced by the offensive as residents of western Mosul suffer food and fuel shortages and markets are closed, UN Humanitarian Coordinator for Iraq Lise Grande told Reuters.

About 160,000 civilians have been displaced since the start of the offensive in October, according to UN officials. Medical and humanitarian agencies estimate the total number of dead and wounded – both civilian and military – at several thousand.

"This is the grim choice for children in western Mosul right now: bombs, crossfire and hunger if they stay – or execution and snipers if they try to run," Save the Children said, adding that children, roughly 350,000, make up about half the population trapped in the entire city. 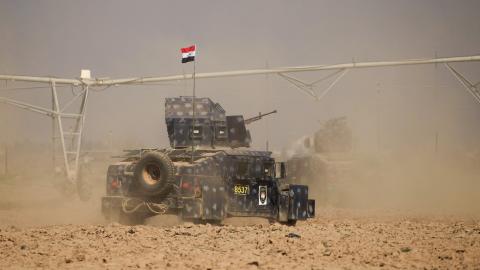