Since the beginning of the fight against Daesh, the US has sent 909 trucks of heavy weaponry to the YPG

The US has distributed new heavy weapons, Hummer trucks and jeeps to the YPG, its partner in northern Syria, to fight Daesh, Anadolu Agency reported.

At least 100 trucks carrying ammunition, arms and armoured vehicles have crossed the Iraqi border and entered the northern Syrian province of Al Hasakah, which is controlled by the YPG.

US President Donald Trump decided on May 9 to continue supplying weapons to the YPG to use against Daesh – just as his predecessor Barack Obama who initially started the program – did. This has caused ire in Ankara which sees the YPG as a threat to its national security.

The YPG, which is the armed wing of the PYD, dominates the Syrian Democratic Forces (SDF) and controls the majority of the area in northern Syria. Ankara considers the PYD to be the Syrian branch of the PKK. The PKK is recognised as a terrorist organisation by Turkey, the US and EU.

According to the Pentagon, the US military provides aid to several armed groups in Syria, including the YPG. The aid so far comprises 12,000 Kalashnikovs, 6,000 machine guns, 3,500 heavy machine guns, 3,000 RPG-7s and 1,000 American AT-4 or Russian SPG-9 anti-tank munitions. 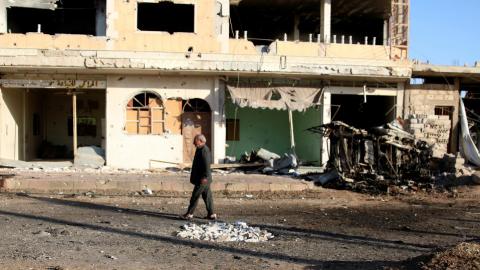 Turkey warns US against treating YPG as an ally in Syria