Syrian regime leader Bashar al Assad has mobilised a coalition of forces backed by Russia and Iran to retake eastern Aleppo, which fell to opposition forces in 2012.

Bashar al-Assad and his allies have taken control of most of Aleppo, which was Syria's largest city before the conflict began five years ago.

They captured 98 percent of the war-ravaged former commercial hub by Monday, the regime said.

But they didn't do it alone.
​
The regime is backed by Russian air strikes and artillery, Iran-backed special forces, Syrian regime troops, and an international brigade of Shia militias from Iraq, Lebanon, Pakistan and the Gulf States.

Iranian advisers helped to co-ordinate the sizeable group of Shia militias that were recruited from Pakistan, the Gulf and other areas of the region, the BBC reported.

A pro-Assad Palestinian group in Syria, called the Liwa al-Quds or "Jerusalem Brigade" were part of the regime's forces. The group is linked to Assad's intelligence services and the Baath Party in Syria. Lebanon's Hezbollah fighters were also involved in the fighting.

An intense bombing campaign by Russian air forces since September, followed by a ground assault of regime troops and Shia militias brought rebel held areas to their knees.

People trapped in east Aleppo said that hundreds of civilians were killed as regime forces intensified their efforts.

Retaking the city may not end the bloody civil war but gives Assad control of five of Syria's biggest cities. 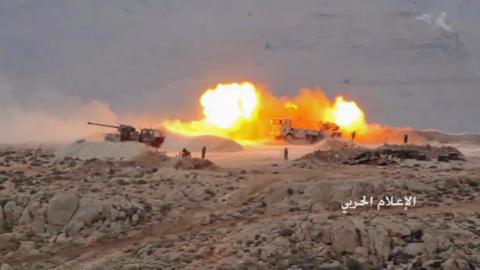