Several soldiers defending Umaliqa base in Amran Province were killed by Houthis who seized a large cache of weapons with a surprise assault on the facility at dawn. Soldiers at the base have been refusing to take sides between the Iran backed Houthis and Saudi backed government.

A government delegate who declined to be named said that the government has suspended the peace talks indefinitely in protest at the Houthis' recent actions and continued violations of the truce.

Yemen's foreign minister and the government's top delegate for the talks in Kuwait, Abdel Malek al Mekhlafi, said that the latest assault has caused a setback in the talks.

"We will take the appropriate position in response to the Houthi crime at the Umaliqa base in Amran for the sake of our people and country," Mekhlafi wrote on his twitter account, accusing the Houthis of "torpedoing" the talks.

The decision to halt the peace talks, which are sponsored by the United Nations, came amid hopes that the delegations from both sides of the civil war were moving closer to finding common ground.

On Saturday, a day before the Houthi assault, UN special envoy for Yemen Ismail Ould Cheikh Ahmed said in a press conference that the talks were proceeding in the direction of peace.

It was the first time face to face talks were held by both parties on the same day since negotiations began on April 21 in Kuwait.

The UN said one year of civil war in Yemen has killed at least 6,500 people including 3,218 civilians while displacing some 2.8 million others. 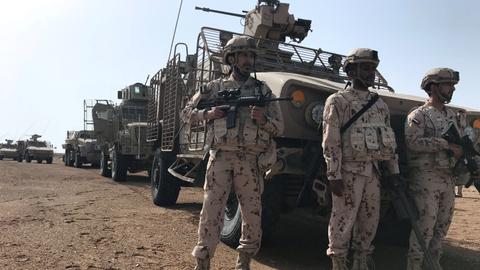