Faylaq al Rahman, the second largest rebel group in eastern Ghouta, has agreed to withdraw from the besieged enclave, says a war monitor and the regime media. The deal provides for the transfer of nearly 7,000 people, fighters and their families.

Eastern Ghouta's six-year rebel rule was in its dying moments on Friday as fighters evacuated one of the Syrian enclave's three remaining pockets and a deal was reached for another, regime media and an opposition monitoring group said.

A blistering regime assault since February 18 on the last opposition bastion outside Damascus has splintered remaining rebel territory into three shrinking pockets, each held by different factions.

The Bashar al Assad regime and its ally Moscow have implemented a "leave or die" strategy with deadly air strikes on the enclave.

For the second consecutive day on Friday, rebels and their families quit one pocket for opposition-held Idlib while regime-run media said a deal had been reached for the evacuation of a second one.

The deal provides for "the transfer of nearly 7,000 people, fighters and their families" from an area in the south of the enclave held by rebel group Faylaq al Rahman, regime television said.

It will empty a southern area of eastern Ghouta that includes the towns of Zamalka, Arbin and Ain Tarma, it said, with evacuations set to begin at 9 am (0700 GMT) on Saturday.

A deal, struck with another group for the smaller pocket of Harasta, began on Thursday and talks are under way for the third and final pocket, which includes eastern Ghouta's main town of Douma.

The Faylaq al Rahman group, which agreed to a ceasefire on Thursday following another wave of deadly air strikes, did not immediately confirm the agreement.

SOHR said it is not clear whether Faylaq al Rahman members will head to the rebel-held northwestern province of Idlib.

16 regime air raids on Douma city, 12 of which were carried out with phosphorus bombs, lighting up the sky above the #Ghouta region as if it's day instead of night. pic.twitter.com/wC6TvKZ7lN

The first batch of fighters to quit Ghouta under a Russian-brokered deal were bussed out on Thursday and started arriving in the northwestern province of Idlib on Friday.

The first buses arrived at a camp after spending the night on the edge of rebel-held territory.

Around 400 fighters from Ahrar al Sham and hundreds of their relatives were bused out of Harasta, a modus operandi the regime has used several times in the seven-year-old war.

"Our situation in Harasta was very tragic," said Abu Mohammed, a civilian who arrived at a camp for the evacuees in the town of Maarat al Ikhwan.

"We couldn't live above ground because of the heavy bombardment ... Some children stayed in basements for four months with no food. We couldn't even find fodder to eat," he said.

Another batch of evacuations from Harasta began on Friday, but it remained unclear how much time would be needed to bus out the thousands of remaining rebels and civilians.

Retaking eastern Ghouta, a sprawling semi-rural area which had escaped regime control since 2012 and lies within mortar range of central Damascus, was made a priority by the regime this year.

Harasta's evacuation came as part of a deal negotiated by Russia, which has played a key role in the deadly offensive launched against the besieged enclave on February 18.

Each one of the three pockets has come under intense bombardment, essentially forcing the rebels that control them to sue for an evacuation.

The offensive on eastern Ghouta has caused widespread outrage and marked one of the darkest episodes of a war that entered its eighth year this month.

The Observatory says more than 1,600 civilians have been killed in just over a month. 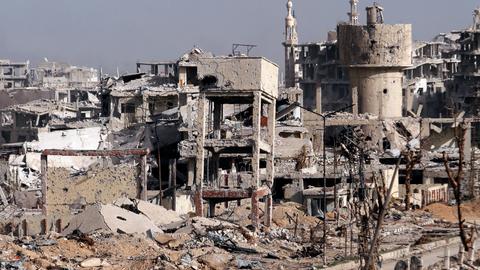