Dozens others were wounded in clashes with security forces as protesters burned car tyres on roads and outside many public offices in the southern city of Nasiriyah, some 300 kilometres south of the capital Baghdad.

Thirteen anti-government protesters were killed on Sunday by Iraqi security forces in one of the "worst" days of clashes in the country's south, as protests swept through the oil-rich area, officials said.

Security and hospital officials, who requested anonymity in line with regulations, said seven protesters were killed in the southern province of Basra, near the Umm Qasr port. Security forces used live fire and tear gas to disperse the protesters.

Officials said four protesters were killed in Nassiriya province, and one killed in both Najaf and Diwanieh provinces.

One security official in Basra said it was "one of the worst" days since the start of the protest movement. At least 150 protesters were wounded.

An estimated 350 people have been killed and thousands wounded in the protest movement that erupted on October 1 calling for a total overhaul of a government widely seen as corrupt and inefficient.

In Iraq's mostly rural south, schools and public offices have been severely affected with many students and teachers leading rallies and sit-ins outside public offices.

The education ministry has issued a directive that classes resume Sunday, the first day of the school and work week in Iraq.

But protesters in Nasiriyah defied the ministry and shut down schools anyway, AFP's correspondent said.

In the oil-rich southern city of Basra, demonstrators blocked main roads just before dawn, including those leading to the ports of Umm Qasr and Khor al Zubair.

The ports, which bring in food and medicine to Iraq but also export fuel products, have seen some delays in loading and offloading due to the unrest in recent weeks. 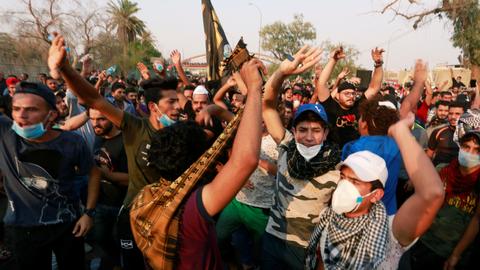 Three protesters dead in clashes with security in Iraq's Basra