The vessels departed last month from Iran’s southern port of Bandar Abbas in a mission described by Adm. Habibollah Sayyari, Iran's deputy army chief, as the Iranian navy's longest and most challenging voyage yet.

An Iranian destroyer and support vessel are now sailing in the Atlantic Ocean in a rare mission far from the Islamic Republic, Iran's state TV reported without offering the vessels’ final destination.

The trip by the new domestically built destroyer Sahand and the intelligence-gathering vessel Makran comes amid US media reports, citing anonymous American officials, saying the ships were bound for Venezuela. The Associated Press could not immediately confirm the ships' destination.

The vessels departed last month from Iran’s southern port of Bandar Abbas, said Adm. Habibollah Sayyari, Iran's deputy army chief. He described their mission as the Iranian navy's longest and most challenging voyage yet, without elaborating.

Iranian state TV released a short clip of the destroyer cruising through the Atlantic’s rough seas. The video likely was shot from the Makran, a converted commercial oil tanker with a mobile launch platform for helicopters.

“The Navy is improving its seafaring capacity and proving its long-term durability in unfavourable seas and the Atlantic’s unfavorable weather conditions,” Sayyari said, adding that the warships would not call at any country’s port during the mission.

Images from Maxar Technologies dated April 28 appear to show seven Iranian fast-attack craft typically associated with its paramilitary Revolutionary Guard on the deck of the Makran. Satellite images from Planet Labs Inc. suggest it left a port at Bandar Abbas sometime after April 29. It wasn’t immediately clear where the Makran and the destroyer are now.

An Iranian navy flotilla is currently crossing the Atlantic Ocean. It includes Makran, a forward staging base, and Iran’s most advanced homemade military vessel named Sahand after a mountain in northern Iran. pic.twitter.com/hEknpVWkv5

US 'prepared to respond' if they are weapons

In Washington, US State Department spokesman Ned Price would not speculate on what the vessels were carrying, saying only “that if this is an effort to transfer weapons or otherwise to violate its international obligations we would be prepared to respond.”

“We have seen the press reports regarding this movement," Price said. “We’re prepared to leverage our applicable authorities, including sanctions, against any actor that enables Iran’s ongoing provision of weapons to violent partners into proxies."

The website Politico first reported in late May, citing anonymous officials, that the ships' final destination may be Venezuela. Iran maintains close ties to Venezuelan President Nicolas Maduro, and has shipped gasoline and other products to the country amid a US sanctions campaign targeting fuel-starved Caracas. Venezuela is believed to have paid Iran, under US sanctions of its own, for the shipments.

So don’t be surprised if in less than 3 weeks we have Iran’s largest military vessel & their most modern warship (a guided missile corvette) patrolling the Gulf of Mexico.

US Defence Secretary Lloyd Austin said on Thursday that he is concerned about the presence in the Atlantic Ocean of two Iranian vessels that are reportedly headed for Venezuela carrying arms.

"I am absolutely concerned about the proliferation of weapons, any type of weapons, in our neighborhood," Austin said in response to a US senator during a congressional hearing.

Asked by Democratic Senator Richard Blumenthal whether the administration "knows exactly what is on those Iranian vessels," Austin was circumspect.

A top aide to Maduro has denied press reports that the ships will dock there. The official spoke on the condition of anonymity to discuss sensitive geopolitical issues.

During a news conference May 31, Iranian Foreign Ministry spokesman Saeed Khatibzadeh declined to say where the Makran was going.

“No country is able to violate this right, and I warn that no one makes miscalculations. Those who sit in glass houses should be careful.”

The fast-attack craft aboard the Makran are the type that the Guard uses in its tense encounters with US warships in the Persian Gulf and its narrow mouth, the Strait of Hormuz. It's not immediately clear what Venezuela's plans would be for those ships.

“If the boats are delivered, they may form the core of an asymmetrical warfare force within Venezuela’s armed forces,” the US Naval Institute said in an earlier published analysis. “This could be focused on disrupting shipping as a means of countering superior naval forces. Shipping routes to and from the Panama Canal are near the Venezuelan coast.”

Iranian Warship Could Be Bringing Millions of Gallons of Fuel to Venezuela - USNI Newshttps://t.co/0n5s1rjhUw pic.twitter.com/9Hnlhh1VsC

Earlier this month, fires sank Iran's largest warship, the 207-metre Kharg, which was used to resupply other ships in the fleet at sea and conduct training exercises. Officials offered no cause for the blaze, which follows a series of mysterious explosions that began in 2019 targeting commercial ships in Mideast waterways.

The unusual voyage comes ahead of Iran's June 18 presidential election, which will see voters select a successor for the relatively moderate President Hassan Rouhani. 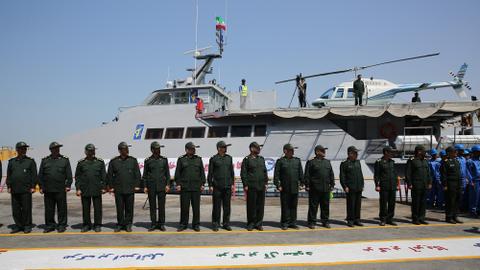 Iran to send warships near US waters from March