Israel heads toward unprecedented third election in one year

Kingmaker Avigdor Lieberman refuses to back either Benjamin Netanyahu or rival Benny Gantz for prime minister, pushing the country into more political uncertainty.

Israeli kingmaker politician Avigdor Lieberman on Wednesday refused to endorse a candidate for prime minister, pushing the country toward a new election for the third time in less than a year.

Lieberman’s comments came ahead of a midnight deadline for Prime Minister Benjamin Netanyahu’s rival, Benny Gantz, to form a coalition. Without Lieberman, Gantz appears unable to secure the required majority in parliament to be prime minister.

If Israel is forced into a third election, it would be entering uncharted waters, with opinion polls already predicting a very similar deadlock.

But a new campaign could benefit the embattled Netanyahu, who is expected to be indicted on corruption charges in the coming weeks.

Netanyahu would be best-positioned to fight any charges from the prime minister’s office.

'I made every effort'

Lieberman, an immigrant from the former Soviet Union, has objected to the outsize influence of ultra-Orthodox religious parties.

The September vote left Netanyahu’s Likud and Gantz’s Blue and White party both short of a majority without Lieberman’s support. But after weeks of negotiations, Lieberman told reporters he could not endorse either side.

“I made every effort. I turned over every stone,” he said.

“Who is to blame in this situation? Both parties together” he said. “There was an impressive blame game from both parties, but at the end it was a blame game, with no real will to take tough and dramatic decisions.”

Gantz was given the opportunity to form a government last month after Netanyahu failed in the task.

A former military chief, Gantz has a midnight deadline to present a potential coalition government. If he fails, as expected, the country enters the final 21-day period for any candidate to present a majority before new elections are called.

But after weeks of failed talks, the odds of any candidate succeeding in forming a government appear low.

Both Gantz and Netanyahu have expressed a willingness to sit together in a unity government. But they could not agree on a power-sharing agreement.

Gantz’s Blue and White party refuses to sit under Netanyahu while he faces such serious legal problems. Netanyahu refused to drop his alliance with smaller nationalist and ultra-Orthodox Jewish parties.

A dizzying array of mediations and creative political machinations failed to break new ground and a Netanyahu-Gantz meeting late on Tuesday night produced no headway, resulting in just more mudslinging.

Netanyahu has lambasted Gantz and his fellow former military chiefs in Blue and White for dangling the prospect of a minority government in which Arab lawmakers would provide outside support without officially joining the coalition.

His comments have drawn accusations of racism and incitement, including a speech by Israel’s President Reuven Rivlin, who criticised Netanyahu’s “ugly” comments about Arabs.

Will not cave - Gantz

A minority government could end Netanyahu’s decade-long grip on power. But Lieberman ruled out any alliance with the Arab lawmakers.

Barring a last-minute development, it looks like Gantz will be forced to inform Israel’s president that he has no government to present — just as Netanyahu did before him — setting off the final 21-day period before new elections are called. The past two have been inconclusive and polls indicate the result of a third will not differ significantly.

“The truth must be said: Netanyahu is rejecting unity and will do anything to deteriorate us to a third election within a year,” Gantz wrote on Facebook. “I am ready to make compromises for the benefit of the citizens of Israel but not to cave on our core principles.”

Looming above the entire process is the long-expected announcement on Netanyahu’s corruption indictment that could remove him from the equation and potentially provide a long-sought way out of the impasse.

Attorney General Avichai Mandelblit has recommended that Netanyahu be indicted on fraud, breach of trust and bribery charges in three separate cases. His final ruling has long been anticipated and is expected in the coming weeks, perhaps sooner. Though Netanyahu will not be compelled by law to step down immediately, it will certainly harden the opposition’s stance.

Rising regional tensions could also force the sides into compromise.

Israel carried out a wide-scale offensive against Iranian targets in Syria early on Wednesday in response to rocket attacks against it. Eleven people were reported killed, including seven non-Syrians who were most likely Iranian.

Israeli security officials expect Iran to respond, which could set off a direct confrontation, a week after the most intense fighting in Gaza in years. Against such a backdrop, the prospect of another dreaded election would weigh heavily on an already weary public.

Rivlin, among many others, has pleaded with the sides to find some sort of compromise to avoid another costly and divisive election campaign and even offered a power-sharing plan in which Gantz and Netanyahu would rotate as prime ministers. 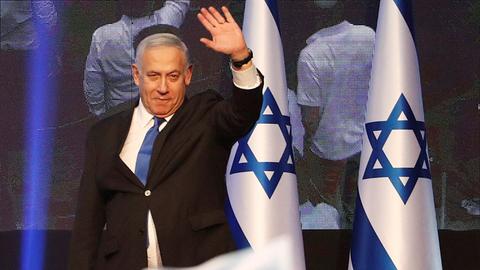