The push to raise money comes after the United States slashed its contribution earlier this year, leaving a 200-million-dollar shortfall.

Jordan said on Thursday it would lead a campaign to raise funds for the UN agency that supports Palestinian refugees, to help it survive after the United States cut its funding.

Foreign Minister Ayman Safadi said a meeting next month in New York on the sidelines of the UN General Assembly would mobilise support for the United Nations Relief and Works Agency (UNRWA) to continue core education and health services.

The Jordanian foreign minister said the New York event aims to "close the gap and put in place a plan that will ensure UNRWA's continued, ongoing funding for the coming years", Safadi said.

It will also "reaffirm that UNRWA is an organisation created by the UN General Assembly, with a clear and particular role, and this role must continue", he added.

Safadi said the meeting, set for September 27 on the sidelines of the UN General Assembly, "aims to provide financial and political support to UNRWA".

UNRWA has faced a cash crisis since the United States, long its biggest donor, earlier this year in January slashed funding by $300 million, saying the agency needed to make unspecified reforms and calling on the Palestinians to renew peace talks with Israel.

UNRWA has warned it currently only has the funds to keep its 711 schools open for the next month.

Speaking alongside the Jordanian foreign minister, UNRWA director Pierre Krahenbuhl said the agency needs $200 million to continue its work until the end of this year.

By the end of September, "UNRWA won't have a penny," the agency's spokesman Chris Gunness warned Wednesday.

"Any shortage in funding will drive hundreds of thousands towards deprivation and despair," Safadi, whose country has 2.2 million UN registered Palestinian refugees, said in Amman after meeting Pierre Krahenbuhl, the UNRWA head.

Jordan will call for an Arab League meeting to lobby for donors to cover the $200 million shortfall needed to shore up UNRWA, Safadi said.

"One cannot wish 5.3 million Palestine refugees away. These are people who have rights and for many years now, for decades have faced a plight and injustice that is simply immense," UNRWA's Krahenbuhl said at a news conference with Safadi.

The agency supports some five million registered Palestinian refugees and provides schooling for 526,000 children in the Palestinian territories, Lebanon, Syria and Jordan.

"As long as a just a lasting solution has not found of the issue of Israel-Palestine conflict we will continue to implement the mandate that the General Assembly has given us."

The Palestinians assert the right under international law to return to homes abandoned in Israel or be compensated. Safadi said funding cuts for UNRWA undermine that right.

"The continuation of UNRWA means continued commitment by the international community to working towards a just solution of the refugees that guarantees the right of return and compensation," Safadi said.

Safadi last week raised the plight of UNRWA with US Secretary of State Mike Pompeo in Washington where officials say he warned of "dangerous consequences" to regional stability if the financial crisis were not resolved. 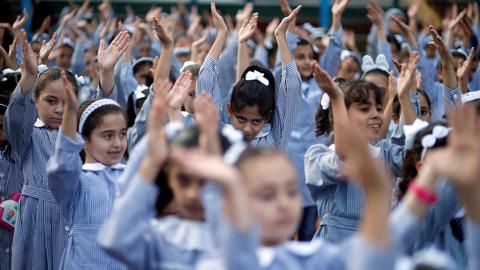 UN schools for Palestinians reopen despite US funding cut