Coinciding with Israel's assault on Gaza, violence is surging between Palestinians and Jews inside Israel, local media reports have showed.

On Wednesday night, Israeli far-right groups took to the streets across the country, clashing with security forces and Palestinians.

Police said they had responded to violent incidents in multiple towns, including Lod, Acre and Haifa.

Israeli television on Wednesday aired footage of a far-right mob beating a man they considered a Palestinian until he lay unconscious on his back in a street in Bat Yam, near Tel Aviv.

"The victim of the lynching is seriously injured but stable," Tel Aviv's Ichilov Hospital said, without identifying him.

WARNING: Videos embedded in this article contain footage that may be upsetting or disturbing.

Another video from the city showed dozens of right-wing Jews were rioting on Wednesday in Bat Yam, attacking and vandalising Palestinian businesses.

There are also reports of Jewish groups were rioting and attacking Palestinians in Tiberias on Wednesday.

A vehicle was attacked by Jews, with one person lightly hurt by rocks, Channel 12 reported. A policeman was also hurt while clashing with the rioters.

In the northern city of Acre, a Jewish man aged around 30 suffered a head injury on Wednesday after being pelted with rocks by Palestinian protestors, while Jewish protesters marched in the city, chanting “Death to Arabs.

Israeli Prime Minister Benjamin Netanyahu said on Wednesday in a video statement that the violence and chaos between Palestinians and Jews in recent days is “insufferable.”

"You can’t take the law into your own hands. You can’t come to an Arab civilian and try to lynch him, just as we can’t see Arab citizens do so to Jewish citizens. This will not stand,” he said.

"We will bring back order and rule to all Israeli cities.”

A state of emergency has been declared in the mixed Jewish-Palestinian city of Lod early on Wednesday, where a Palestinian resident was shot dead and a synagogue reportedly was torched earlier in the week.

Despite the state of emergency, videos continued to emerge in which Palestinians were attacked in the city.

A group of Jewish rioters sought to enter a Palestinian family’s home on Wednesday.

The suspects were tried to get through the doorway but two members of the family stopped them as children were heard crying in the background.

There were no immediate reports of injuries.

In Haifa, another Jewish group pelted Palestinian men in a car with rocks, local media reported.

Palestinians were trying to run safety from the Israeli mob as there were no police presence at the scene.

Mob stops car with two young Palestinians in Haifa and tries to beat them.
They run and I hope they managed to get to safety. pic.twitter.com/8LbVMiqvIV

The Northern District of the Israel Police force said in a statement on Thursday that 82 overnight arrests take the total number held since the start of Jewish-Palestinian fighting on Monday to 232, local media reported.

Police said the suspects were being held on suspicion of involvement in a number of crimes including rioting, arson and throwing rocks.

READ MORE: How world powers are reacting to Israeli attacks on Gaza 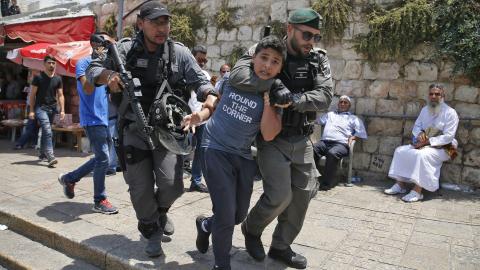 Clashes in Jerusalem as tension mounts over Al Aqsa security 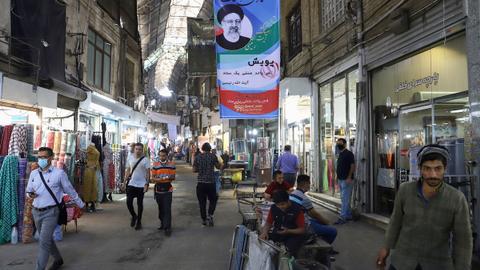