Britain-based war monitor reports dozens of air strikes hitting several areas in Eastern Ghouta region, despite the area designated as one of the four de-escalation zones in the war-torn country.

The region of Eastern Ghouta is home to an estimated 400,000 people living under a crippling regime siege that has made food and medicine almost impossible to acquire.

The area has been designated as one of four de-escalation zones in Syria, but residents there have been facing escalating bombardment in recent weeks.

The deadliest raids on Monday hit a market in the town of Beit Sawa, killing 10 civilians including two children.

Another nine civilians, two of them children and one a local rescue worker, were killed in Arbin.

Nine more civilians died in strikes across the rest of the besieged region, and dozens more people were wounded, the Observatory said.

The barrage of bombardment came as the United Nations children's agency warned of the dire risks to children in the Middle East's war zones.

In Arbin on Monday, an AFP news agency correspondent saw the lifeless bodies of young children laid out on the floor in the local hospital.

One of the dead was a member of a volunteer rescue force in the town, and a group of his colleagues could be seen crying over him.

Outside, a man sat sobbing silently atop a pile of rubble after having lost two of his family members in the raids.

AFP correspondents reported that air strikes began at around 10:00 am (local time) on Monday, and airplanes could still be heard circling above in the afternoon.

Hey pray for Syria . Sad day for this country. Hospitals bombed . Imagine bombing babies who are only few days old.

In apparent retaliation, rockets and mortars rained down on government-controlled districts of Damascus, the regime-run news agency SANA reported.

One woman was killed and four people were wounded in mortar fire on the Bab Touma neighbourhood and the capital's Mariamite Cathedral, a Greek Orthodox church, a police source told the agency.

Another person was killed and nine people wounded in rocket fire on the regime-held part of Harasta district.

Syria's war has killed over 400,000 people and displaced millions since it began in March 2011 with the brutal repression of anti-regime protests. 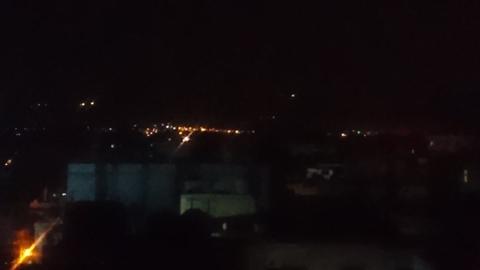