Egypt has been fighting the Sinai affiliate of the Daesh extremist movement for years and struggling to re-establish control over the restive border region.

An explosion hit a military armoured convoy in the Sinai peninsula Thursday, causing at least 10 casualties among soldiers who are participating in a campaign against an insurgency in the volatile region, Egyptian authorities reported.

The military spokesman, Tamer Refai, did not specify the number of soldiers killed by the improvised explosive device. But other officials, speaking on condition of anonymity, said 10 soldiers died, including an officer, and three others suffered shrapnel wounds.

The attack near the small Sinai town of Bir al Abed occurred during the Islamic holy month of Ramadan, after sundown when Muslims break their daily fast.

Other details about the incident could not be independently corroborated as Egyptian authorities heavily restrict access to that part of Sinai.

President Abdel Fattah el Sisi gave his condolences in a statement posted on Facebook, praising the fallen soldiers as “heroes” and “martyrs.”

There was no immediate claim of responsibility for the attack.

For years, Egypt has been fighting the Sinai affiliate of the Daesh extremist movement and struggling to re-establish control over the restive border region.

Most extremist attacks have occurred in marginalized northern Sinai, but militants have also struck at police officers, troops and other high-profile targets in the mainland.

Earlier this month, an Egyptian police officer and seven suspected militants were killed in a firefight in the capital of Cairo. 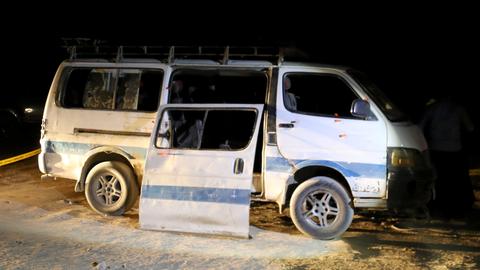