At least 10 Palestinians were killed in a fresh Israeli air strike in the northern Gaza Strip on Tuesday, shortly after the killing of a resistance commander in the territory.

The ministry said a 20-year-old youth, who was identified as Mohammed Atiyyah Hammouda, was also killed, but without giving any details about the circumstances of his death.

In all, 10 Palestinians have been killed in Tuesday’s fighting, the worst bout in recent months, according to the health ministry.

According to the ministry, 18 Palestinians have been injured in Israeli attacks across the Gaza Strip.

The situation escalated in Gaza early Tuesday after Israeli forces killed two senior Islamic Jihad members in Gaza and Syria's Damascus early on Tuesday in a rare targeted killing that threatened to unleash a fierce round of cross-border violence with the group.

The group said commander Bahaa Abu al Atta and his wife were killed in an airstrike in Gaza and their children were wounded, while the home of senior Islamic Jihad member Akram al Ajouri was targeted in Damascus, killing one of his sons.

Jonathan Conricus, a military spokesman, said the operation had been planned long ago.

Conricus called Abu al-Atta "ticking time bomb", saying he had been responsible for a number of recent rocket attacks on southern Israel and claiming that he was actively planning new attacks.

"We essentially over the last week have been waiting for the opportune moment to conduct this surgical strike," the spokesman said.

Gaza's Health Ministry said a man and a woman were killed in an airstrike at a house and two other people were wounded.

The armed group said Abu el Atta, 42, was undergoing "a heroic act" when he was assassinated.

It did not elaborate, but vowed revenge.

Minutes after the group confirmed the death, barrages of rockets could be heard fired toward Israel.

Air raid sirens continued to go off throughout the morning as far away as Holon and Rishon LeZion, two suburbs of Tel Aviv.

Meanwhile, Syrian regime media earlier reported that the attack in Damascus killed at least two people and wounded six during the early hours of Tuesday morning.

An Islamic Jihad member confirmed it was the same incident in which the home of its top official, Akram al Ajouri, was struck.

In a statement, Islamic Jihad blamed the attack on "the Zionist criminal enemy".

Israel on Tuesday also shut down crossing points into Gaza and reduced the permissible fishing area off the territory's coast to 6 nautical miles in anticipation of a looming confrontation.

In Israel, schools were canceled in communities and towns along the Gaza Strip's boundary and all the way to Tel Aviv, about 90 kilometres north of Gaza.

Islamic Jihad is an Iranian-backed armed group that often carries out attacks independent of Hamas, the political party that controls Gaza. 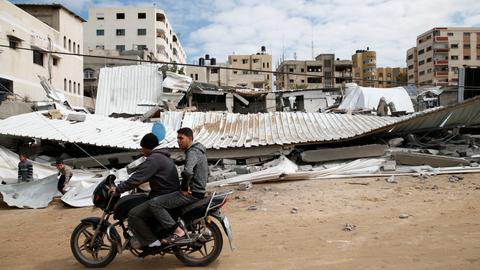 Israeli air raids in Gaza: ‘As much as we get used to it, we’re terrified’